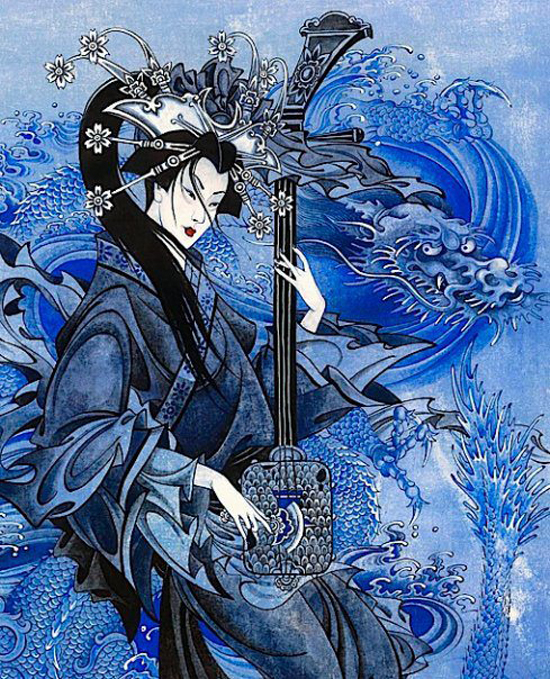 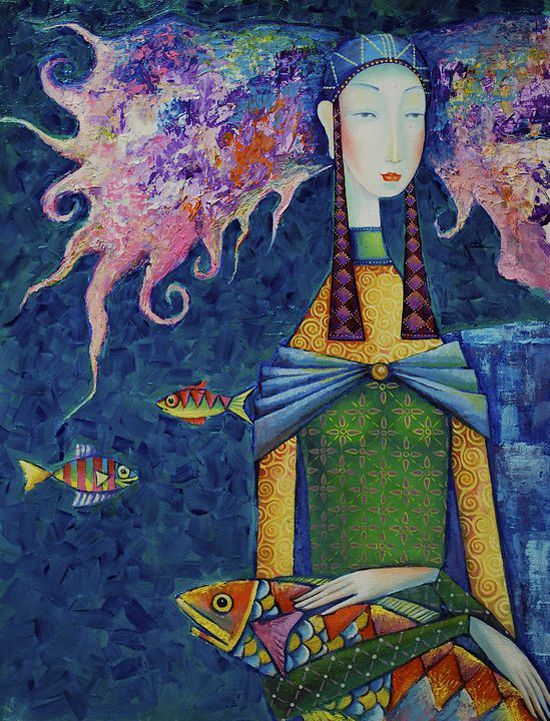 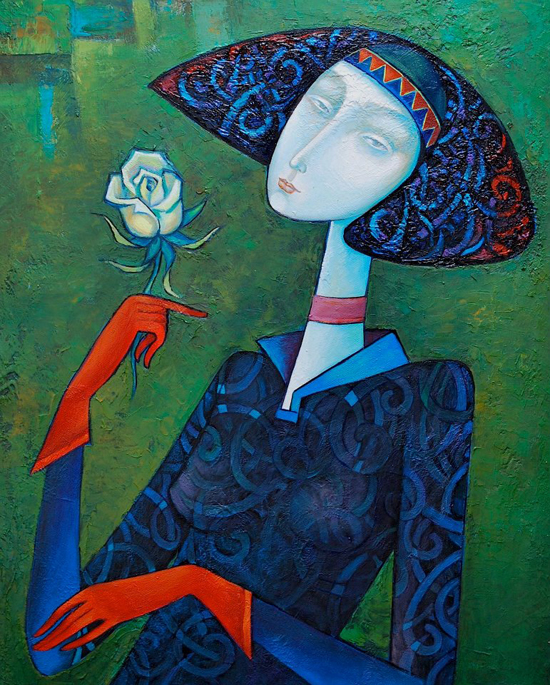 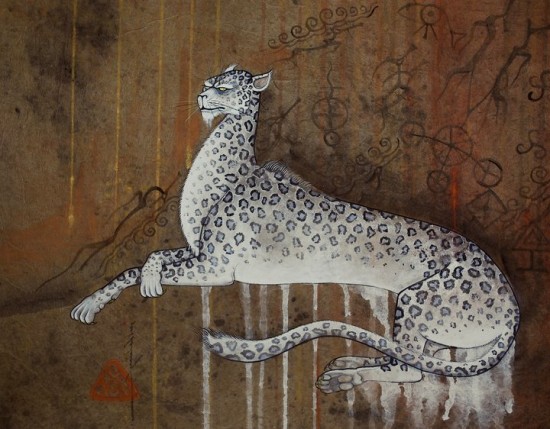 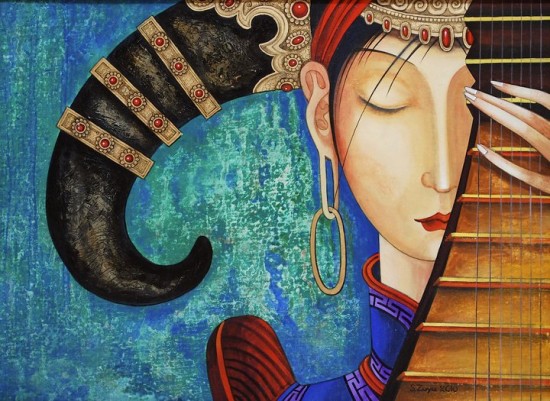 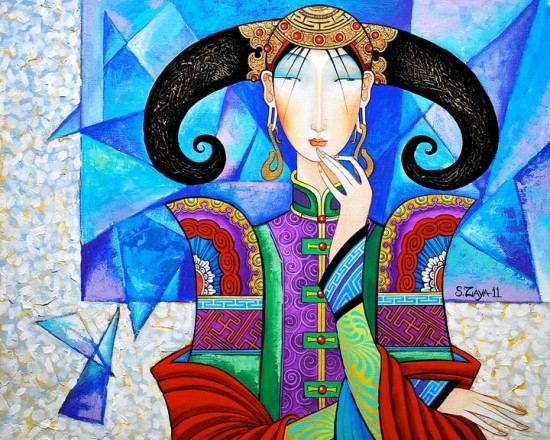 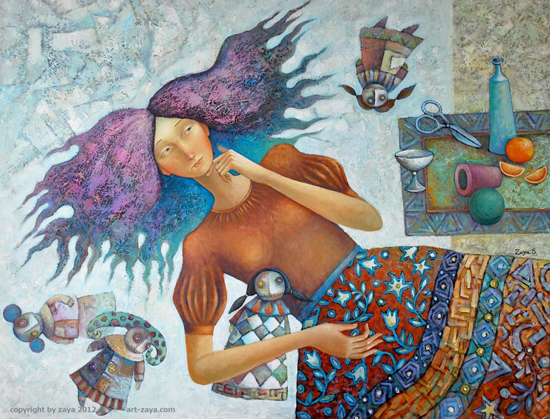 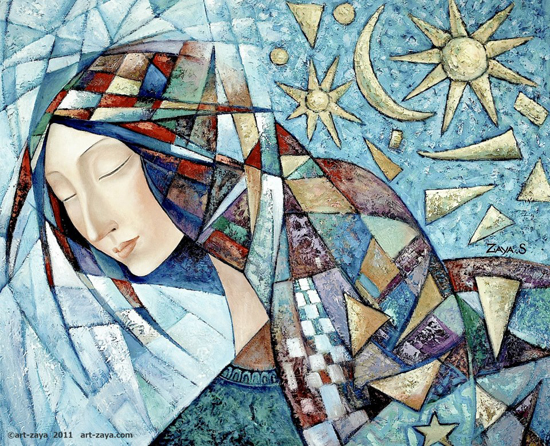 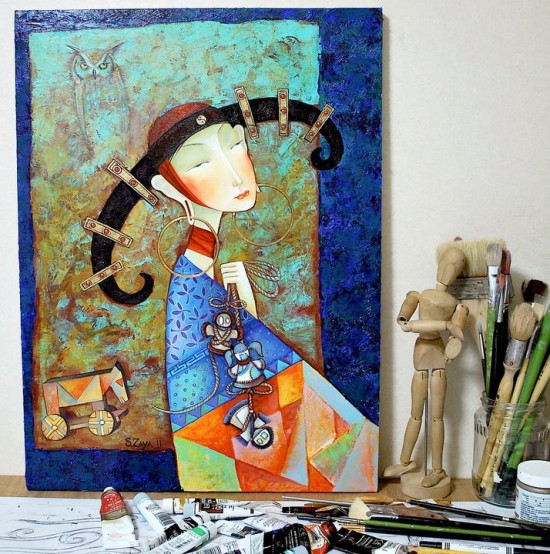 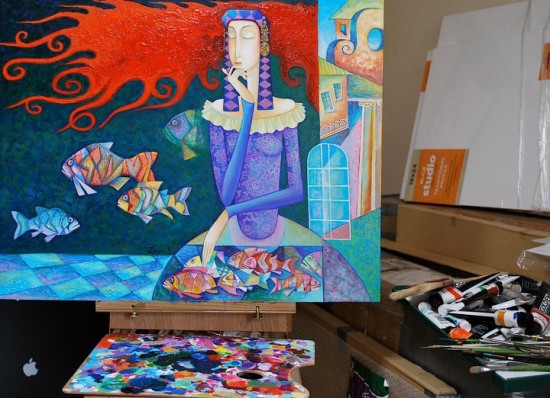 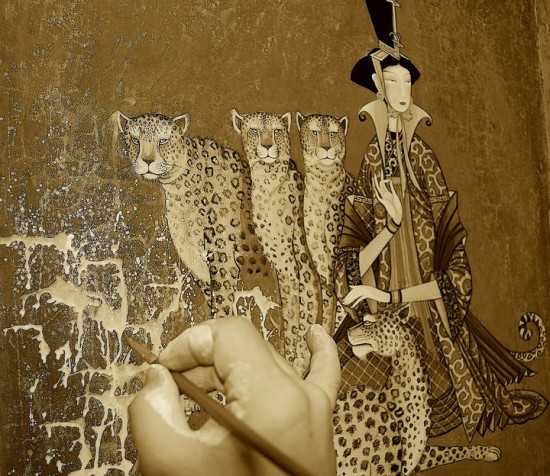 Zayasaikhan Sambuu born in 1975 better known as Zaya, comes from a small, isolated town in the Gobi desert in Western Mongolia. Zaya combines the styles and themes of Mongolian traditional painting with contemporary Asian art in “a bridge between old and new art.” Scenes of ancient daily life, echoes of his nomadic, Central Asian roots, themes of Tibetan spirituality and traditional Mongolian and Japanese techniques all go into the unique mix he brings to his canvases. Using a technique that fuses watercolors, gouache, brush, and mixed media, Zaya works with a warm yet somewhat dark palette.

Many of Zaya’s paintings depict noble or royal Mongolian women, all with costumes and hair styles drawn from traditional fashion designs of nomadic aristocracy. These figures are often accompanied by wild animals such as snow leopards and cheetah or wolves symbolizing the connection of beauty to nature.

Zaya feels that because of the constant migration and never-ending warfare of the Central Asian nomad lifestyle, the art and culture of Mongolia, though rich with beauty and mystery, is largely unknown to the rest of world. Zaya has made it his mission to evangelize Mongolian art through a contemporary oeuvre that suggests antiquity.

Mongolia’s nomadic culture and heritage was largely forgotten even in Mongolia during the country’s communist era, in fact, and began to reemerge only as oppression and censorship started to fade away during Zaya’s teenage years. Zaya, who showed early talent as an artist, was encouraged by his elders to render portraits of Buddhist Gods as the culture began to recover religious customs and values that had been forbidden for decades under the communist regime.

So strong was the pull of Buddhism on Zaya that at the age of 15 he decided to become a monk. However, after two years of studying Tibetan religious texts and living within the strict rules of the order, he realized that his interest lay in art itself rather than religion. Zaya then enrolled in the Soyol Fine Art College in Ulaanbaatar to study traditional Mongolian fine arts.
He continued to study at the Institute of Fine Art at the Mongolian University of Culture and Art, from which he graduated in 2002 after successfully presenting solo exhibitions in the Art Union of Mongolia. In 2003, Zaya was named the best young artist in the Art Show of Young Artists content.

In recent years, Zaya has joined the international community of artists, with shows in USA, Australia, UK, Japan and Europe.