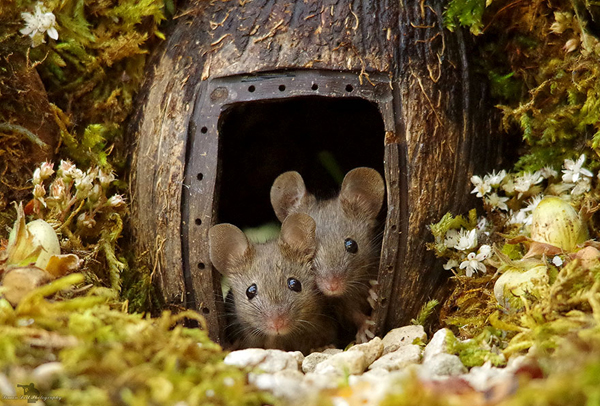 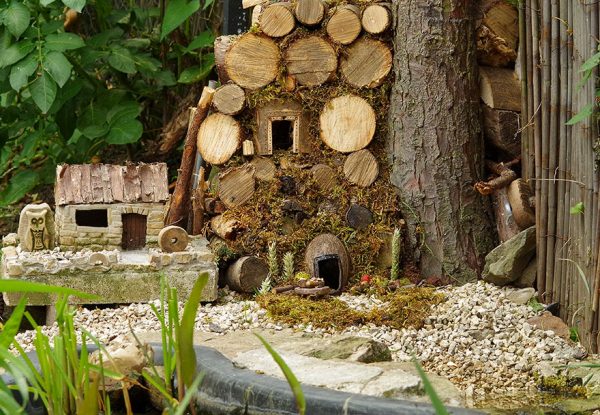 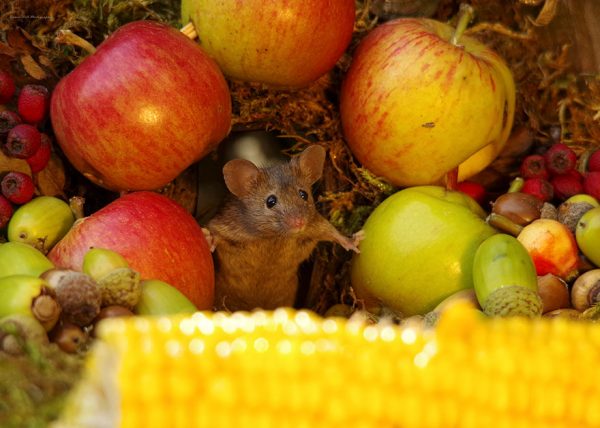 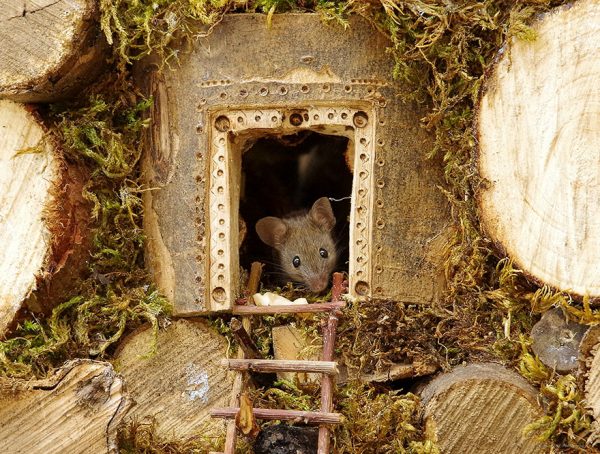 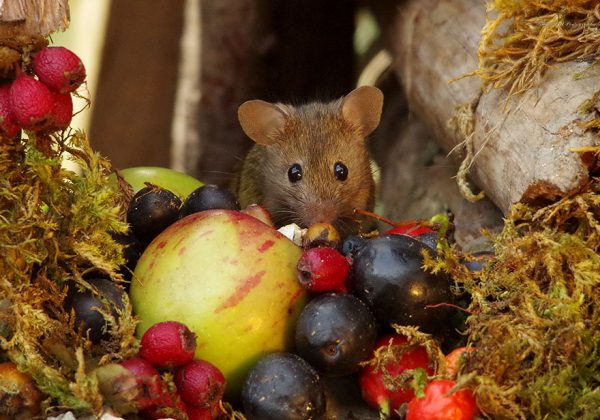 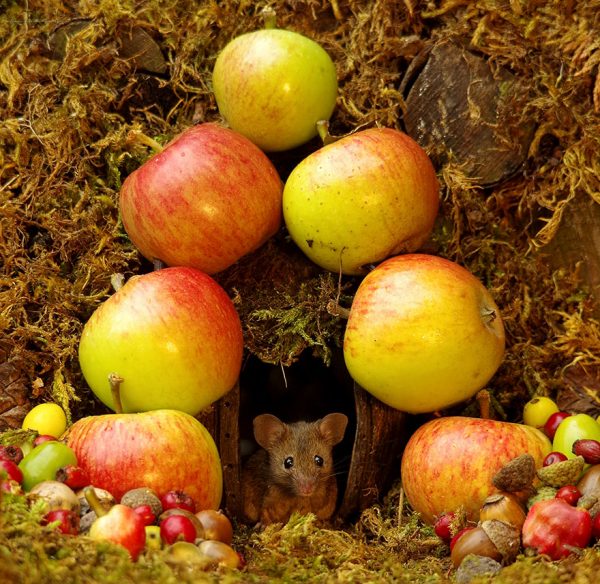 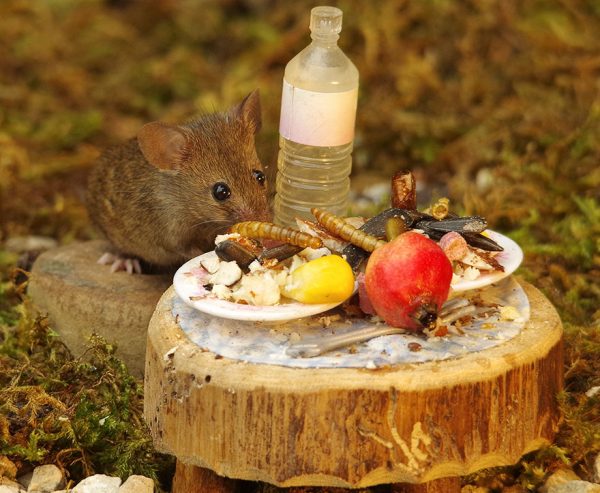 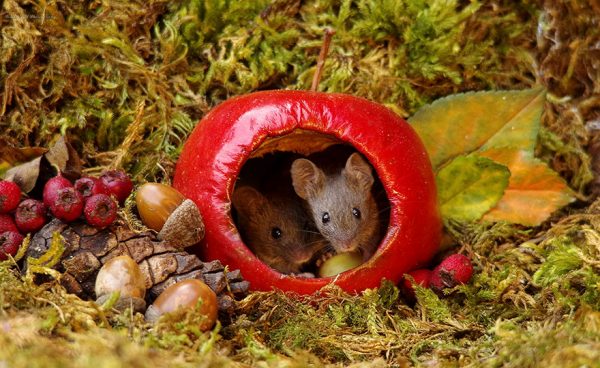 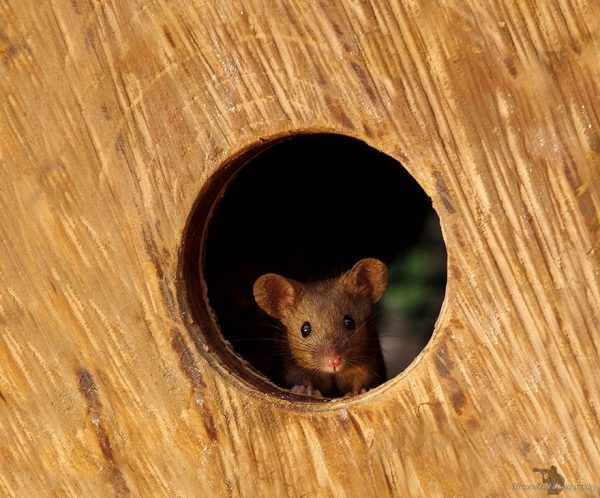 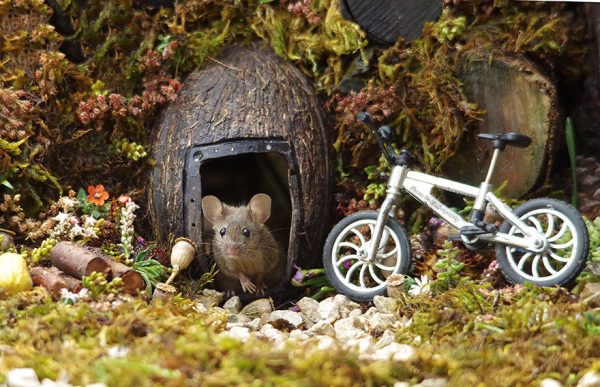 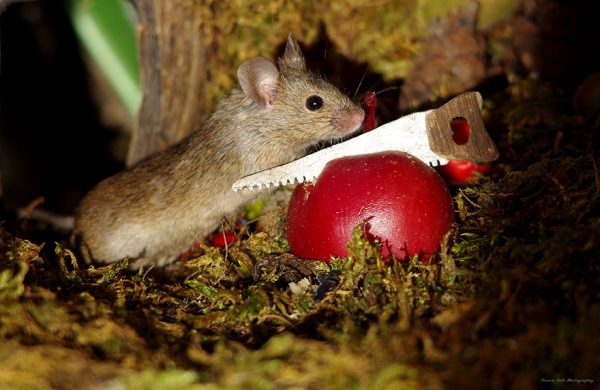 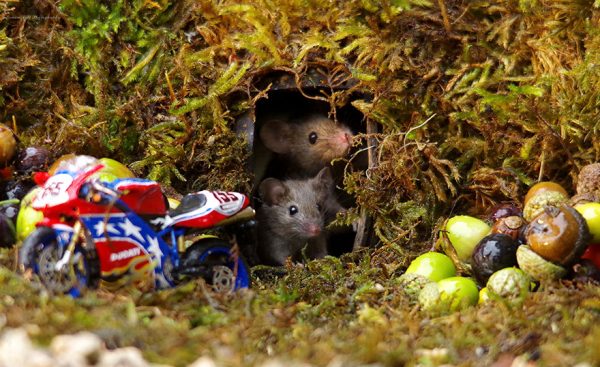 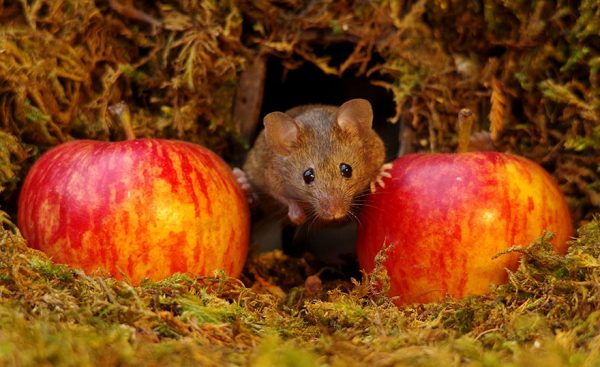 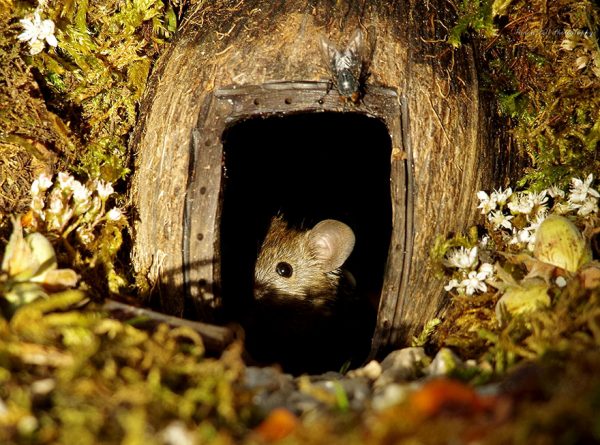 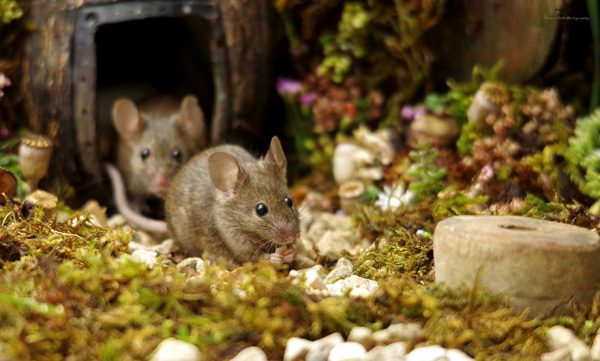 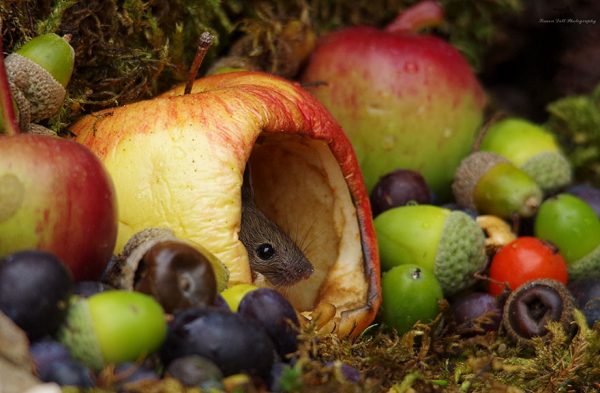 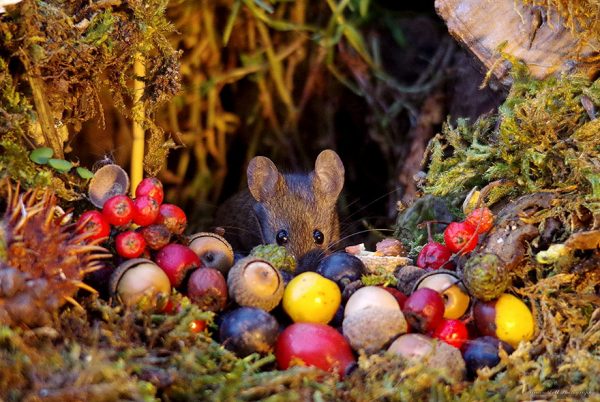 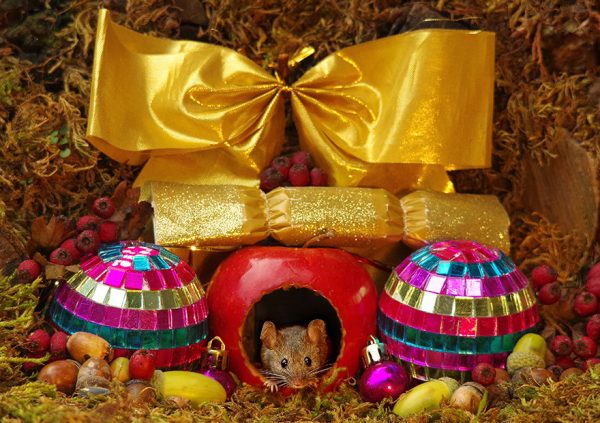 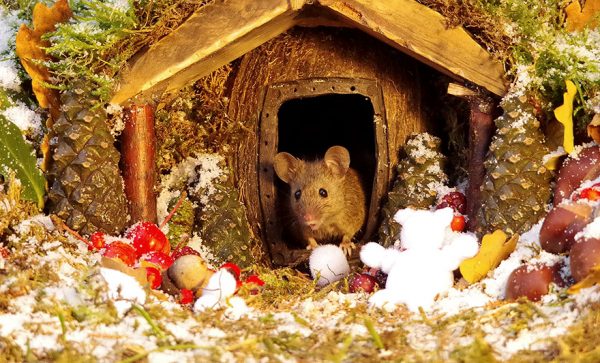 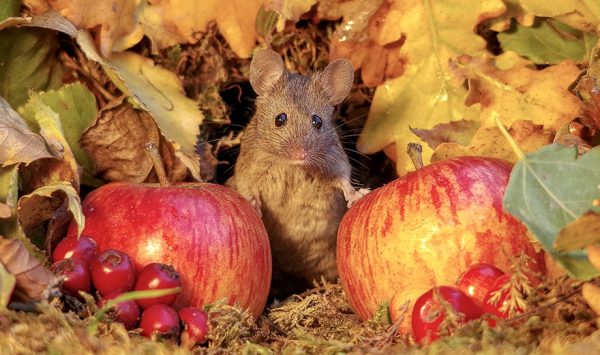 Recently, photographer Simon Dell stumbled upon a family of mice running around his garden. Instead of reaching for the traps, however, he took out his tools. Dell built the mice a miniature village and they repaid him by posing in front of his camera.

“I was out one day just taking photos of the birds in the garden and having just cut the grass I noticed something moving on the ground,” Simon told Bored Panda. “I pointed my camera at the ground and was shocked but very happy to see a very cute little house mouse standing up just like a meerkat in the fresh cut grass.

I knew instantly he was a star and ran back inside to get a couple of peanuts to put down for him. Sitting there, waiting, it was only minutes before he came back out for the treats.

It was at that point I thought I would give him a little shelter and safe place to hide and feed.

I had a bit of experience taking photos of wildlife and mice as I also had another mouse that used to live in my garden shed and only come out after dark. He was a wood mouse and we named him Stuart.

He was once a single mouse but he left at the start of spring 2018, maybe to find a mate. Hoping he comes back this winter and maybe he could get to know the new mice in the garden.

We get all kinds of wildlife in the garden. Many types of birds, such as starlings, house sparrows, blackbirds, robins, and more. Even a grey heron who has taken most of the goldfish from my ponds.

We also have a fox that visits every night and a lot of hedgehogs and squirrels.

At first there was just the one mouse. He had a cut in his ear and we called him George. I piled some small logs around a box as a home for the mouse and covered it with moss and straw to give him a little shelter.

I could see the cats sitting just feet away at the other side of a fence so the log pile also gave him a bit more safety.

I then put up some wire fencing along the fence so there was no way the cats could get to the mouse. I also have a small Jack Russell Terrier dog so the cats know not to come in the garden and the dog pays the mice no attention.

A couple of days later, I noticed there could be more than one mouse inside the log pile and it was not long ’till they both came out for a bit of food.

I decided to build them a home as I wanted to give them a safe place in the garden and not fall prey to cats or other animals. Also, as I was feeding the mice it was the right thing to do as I would feel it was my fault getting them to come out if they became prey. Being a wildlife photographer, I wanted to create a nice looking habitat for any pictures I would take.

The first stage of the log pile was very easy and only took an hour or so to make. As more mice came the following days, however, I made changes, adding more rooms. The inside of the box structure has 2-3 ways in and out, so they can escape if need be. Over the weeks and months, the log pile village has been steadily growing.

I added more space and made it ready for a cold winter, giving the mice the best chance possible to survive. I have counted around 5 or more mice and the female, Mildred, is looking very pregnant so hoping we will have a large litter of baby mice around Christmas.

Knowing mice can have up to 14 babies, I could be building many more log pile rooms. But I have space and don’t mind living alongside such cute and very photogenic little critters.

The mice seem to love the log pile homes and wasted no time in moving in. They are wild animals so they still run if I get too close or move too fast but often I manage to sit down just a few feet away with a zoom lens and they seem happy to pop in and out for nuts a seed.

The food I give them is usually all natural. I pick or collect berries, nuts, and fruits that grow wild just over the road in the Shire Brook Valley Local Nature Reserve. I also give them the same mix of seeds that I put on the bird tables along with sunflower seeds and other hazel or walnuts. As a treat, I give them a couple of dry mealworms and some suet pellets but do try and stick to a natural healthy food.

The mice are still here and living a very happy life. It is winter now, so the days are shorter and they come out less often. Once it gets dark, it can be hard to see them. However, I see them come out in the day for food and it is always all gone by the next morning. I also give them handfuls of feathers from an old pillow and they take that to line their beds inside and keep them warm on these cold UK winter nights.”