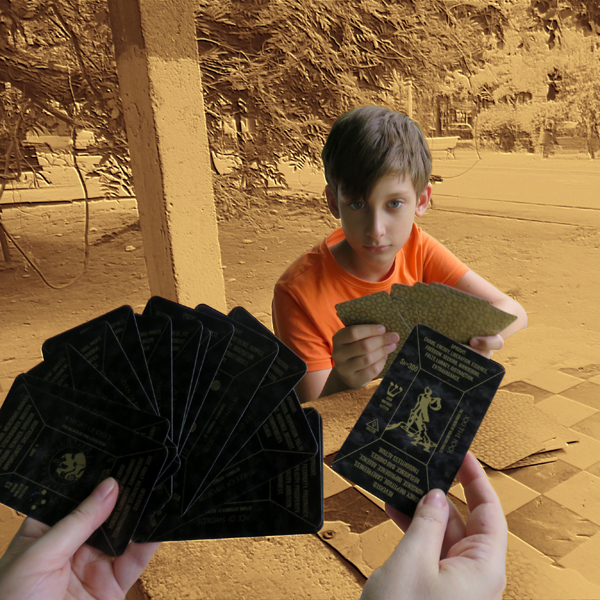 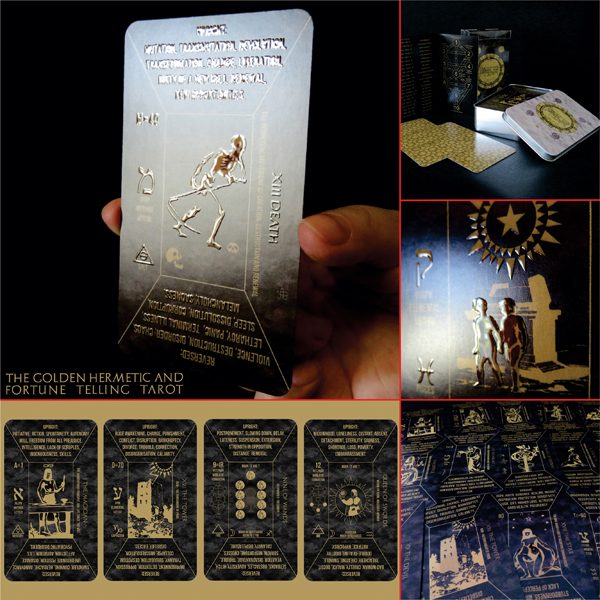 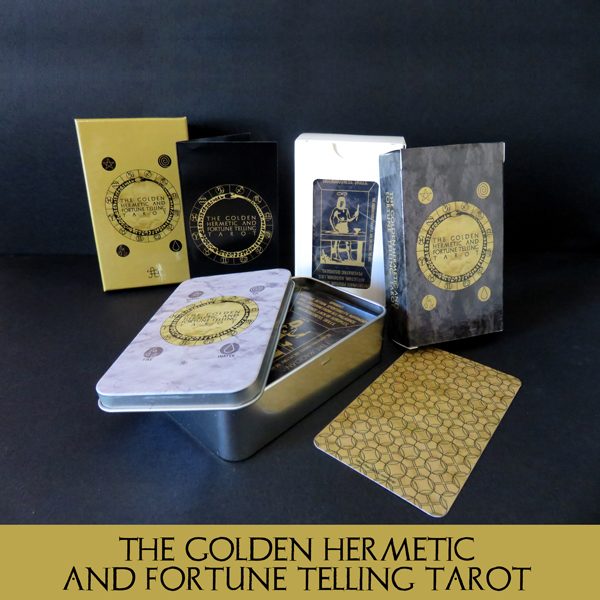 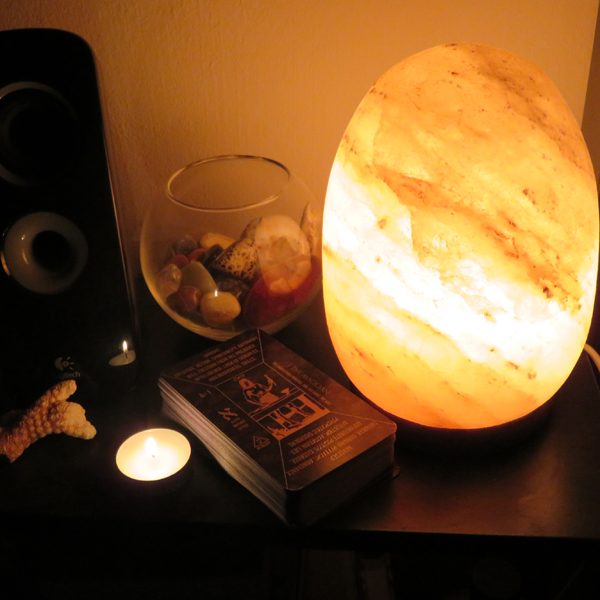 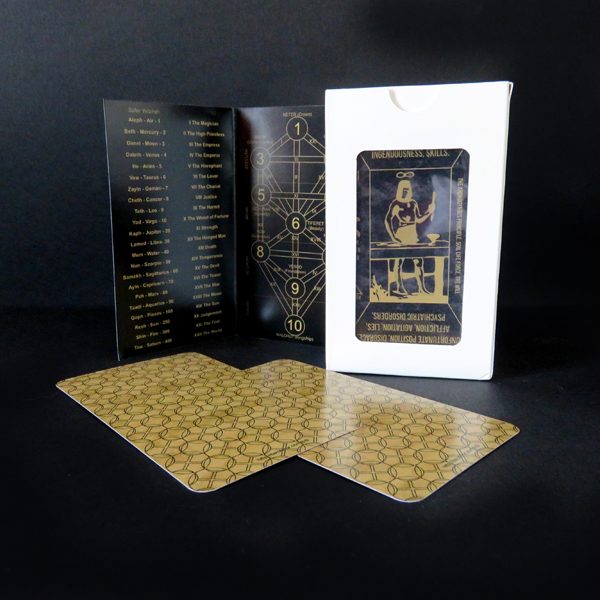 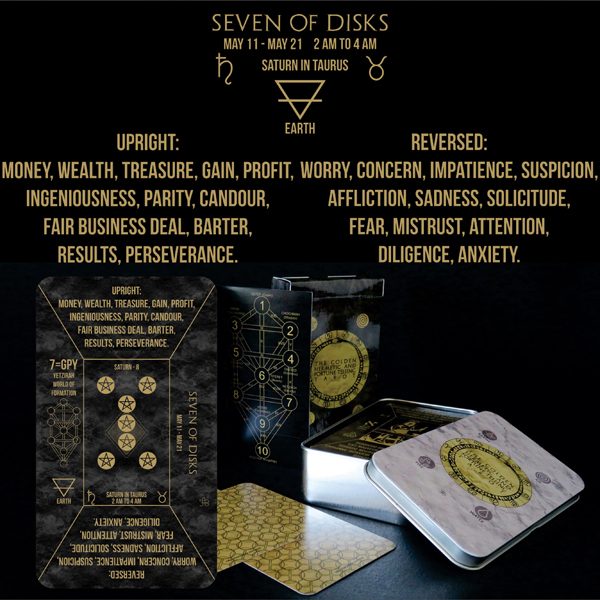 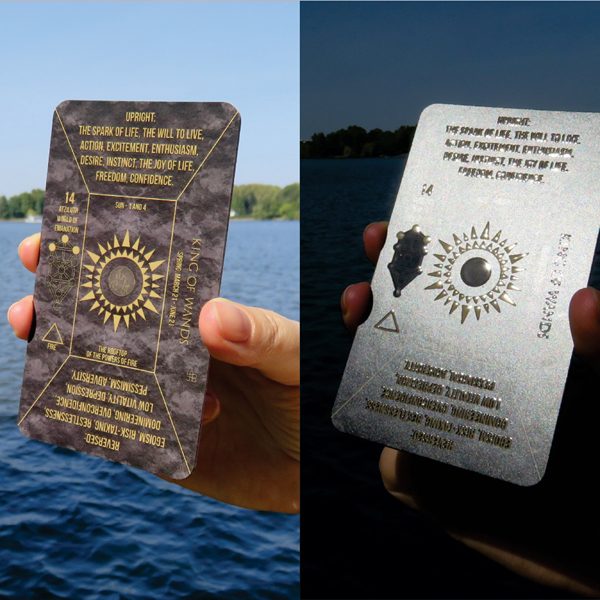 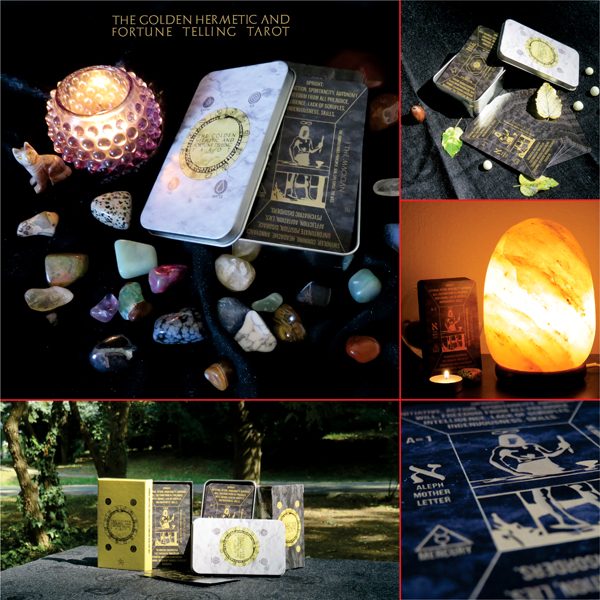 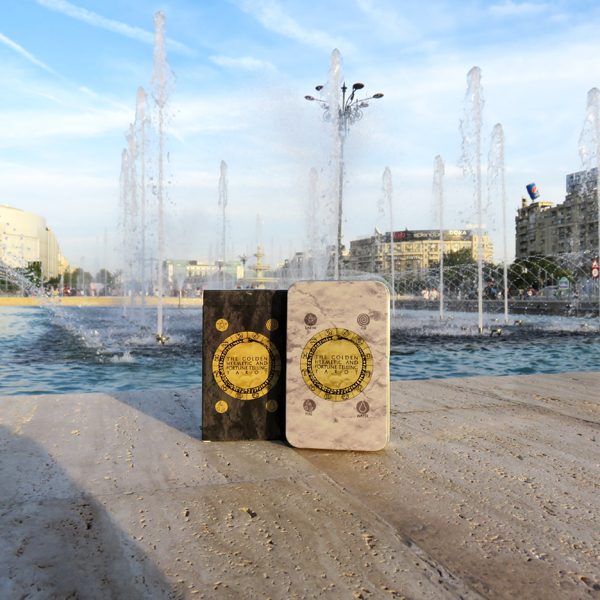 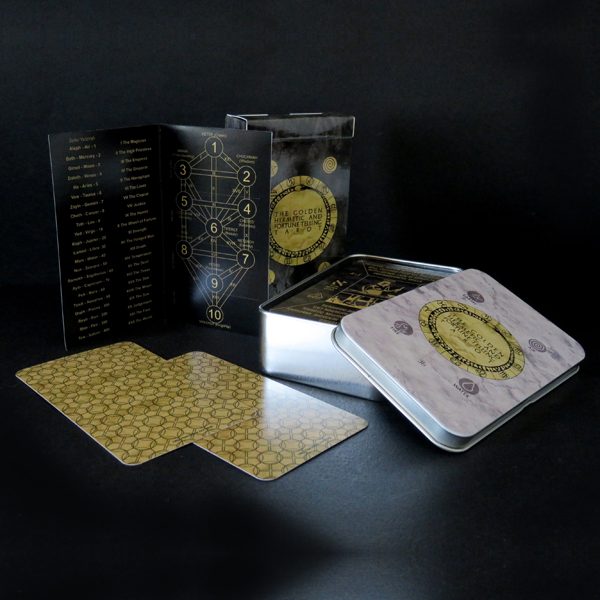 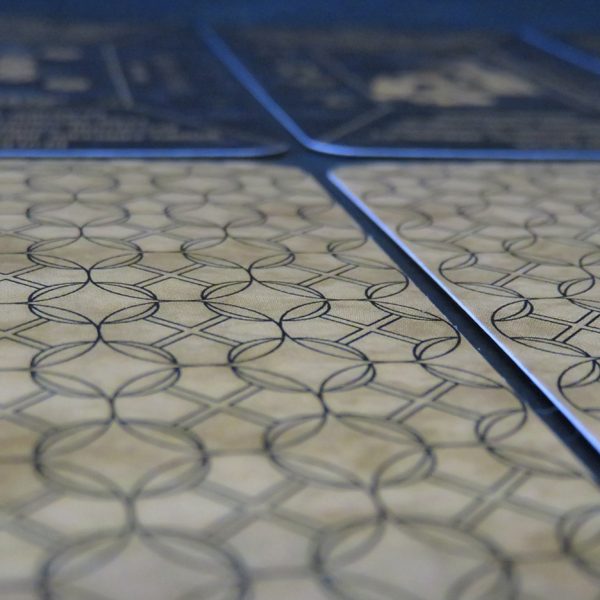 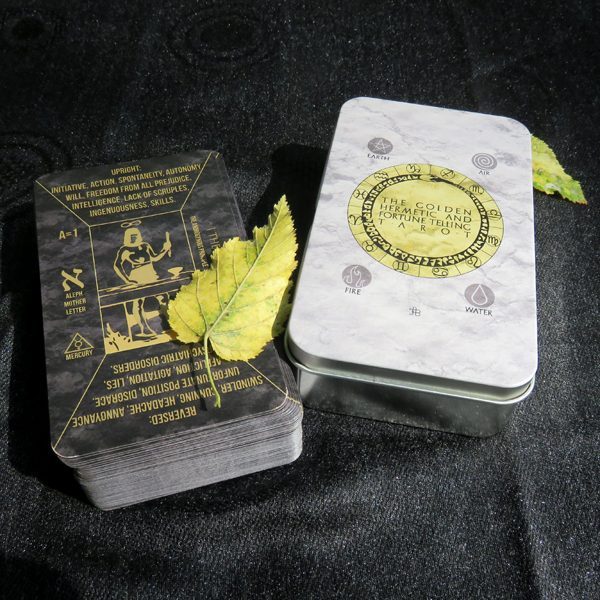 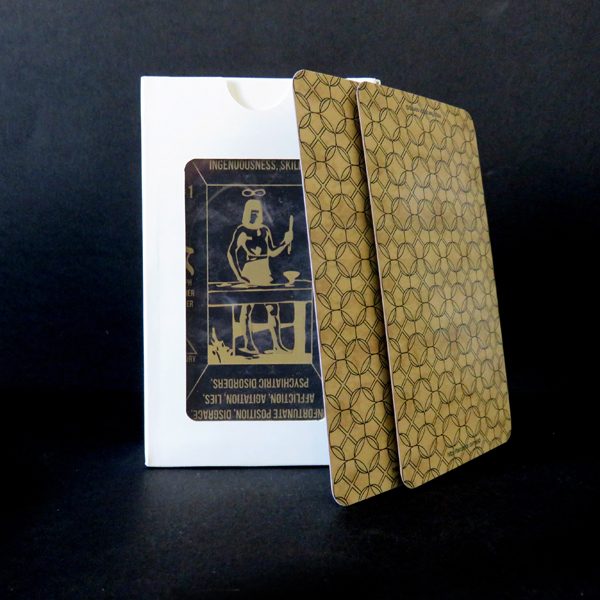 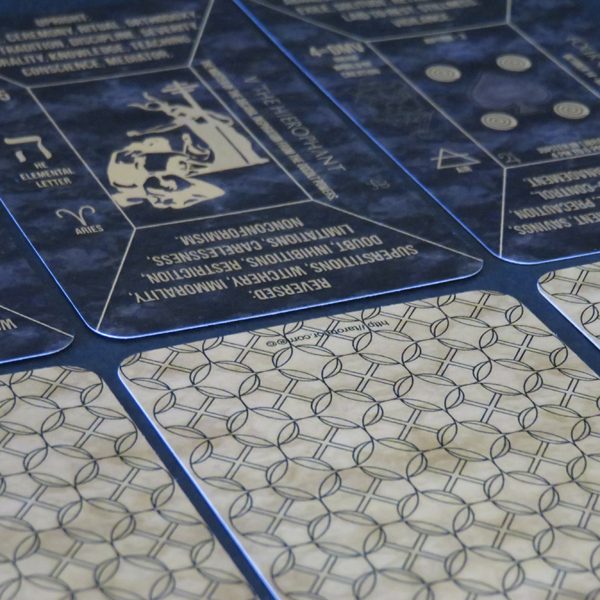 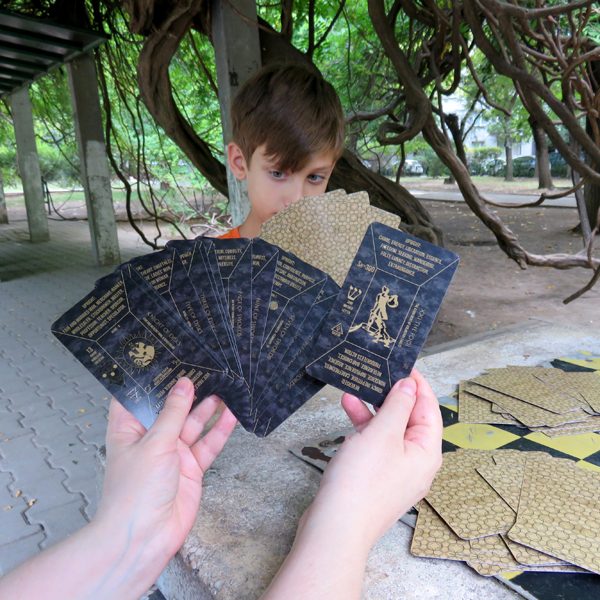 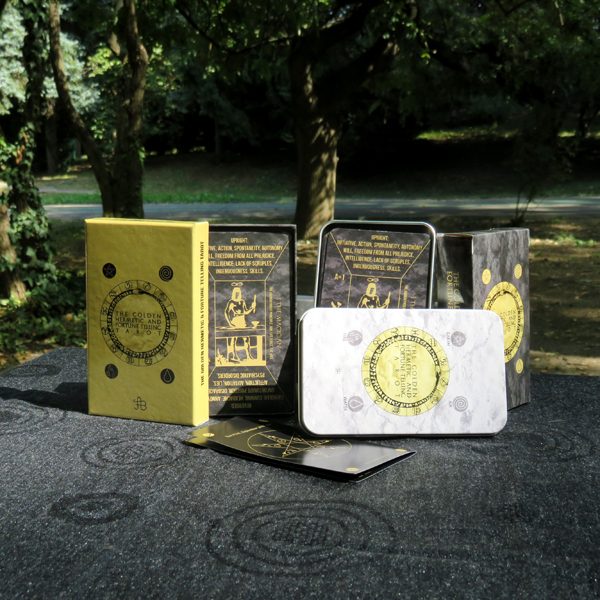 The Tarot surfaced, apparently out of the blue, at the mid-15th century in Northern Italy. The first documented Tarot decks were recorded between 1440 and 1450. It is still disputed between scholars if the Tarot was a local invention, respectively a further development of the ordinary deck of playing cards or if it has an unknown, yet to be revealed origin.

Tarot is a trick-taking game, commonly played by four players. However, it is also possible for two, three, five or six to play.

The earliest evidence of the Tarot deck used for cartomancy comes from an anonymous manuscript from around 1750. We owe the popularisation of the use of the Tarot deck for divination and fortune-telling to the French occultist and cartomancer Jean-Baptiste Alliette, better known as Etteilla.

The Golden Hermetic and Fortune Telling Tarot deck can be used both for playing the game or esoteric purpose. However, I would recommend keeping a separate deck for divination and fortune-telling.

Why the Golden Hermetic and Fortune Telling Tarot deck?
The GHaFT Tarot deck:

– Black and Gold, elegant design. The easily distinguishable design and artwork facilitate identifying the cards at first glance. Black is the colour of darkness, it represents our fears and the unknown. Gold represents the Sun, the source of light and the strength originated from knowledge. Can’t cast a shadow without a light.

– Has high-quality cardstock and special varnish for endurance, easy shuffling and handling. The cards are flexible and resistant.

– It is an excellent learning and study Tarot deck. Everything someone wants to know, including upright and reversed interpretation, timing details, astrological, cabalistic and numerological attributions, is all featured directly on each card!

– Includes a complete esoteric and fortune-telling manual, introducing both traditional card reading techniques and fundamental notions of Astrology, Numerology, Kabbalah and Gematria explained step by step in a very accessible manner for both, beginners and advanced users.

– The GHaFT Tarot is a traditional Tarot deck based on the teachings of Éliphas Lévi, S. L. MacGregor Mathers founder and head of the Hermetic Order of Golden Dawn (and mentor of Aleister Crowley), Arthur Edward Waite, Oswald Wirth, Etteilla and Papus.

– The Tarot is also a highly entertaining social game. The Tarot game is known as Le Tarot, Jeux de Tarot, Tarocchi, Trumps, Tarock, etc. and it is popular in continental Europe, especially in Italy, Austria and France. It is a trick-taking game that can be played with two to six players. Hands move quickly, it is easy and a lot of fun.

– However, the Tarot is not only a fun game to play but an excellent opportunity to get off from your electronic devices and reconnect with the real world, your loved ones, family, children and friends. The GHaFT Tarot deck was designed both for entertainment and divination and fortune-telling.

– The digital booklet accompanying the deck includes several methods and detailed instructions on how to play the Tarot game. Parental guidance is advised.

– Not at least, it is an exclusive collector’s item.

Can get your copy exclusively on IndieGoGo: https://www.indiegogo.com/projects/the-golden-hermetic-and-fortune-telling-tarot-deck#/
The campaign runs between September 24 and November 4 2018.