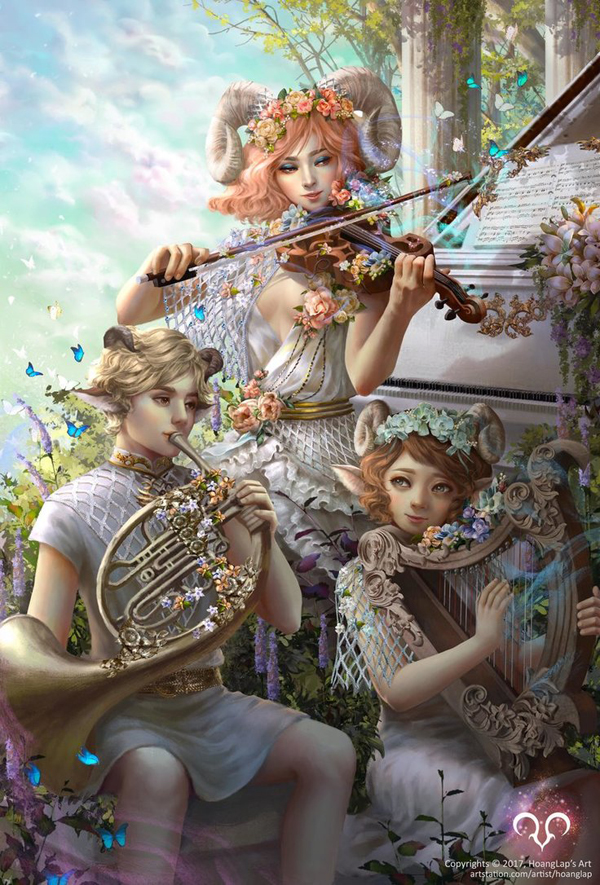 Once upon a time, A boy and girl were brought into the forest, bounded their by their parents because they couldn’t afford to feed them anymore. Mesmerized by the beauty of spring flowers, they heard a beautiful enchanting sound, which leading them into a delighted garden, full of light and melodies. Here they met a young maiden , dressing in white, with giant horn on her head. She’s guardian of Youth , protecting abandoned children by leading them into her own secret garden.
“Don’t be afraid my little beloved childs, you’re now parts of our big family, we will forever live young, pure and joyful, in the air of Spring.”

She’s guardian of the sacred temple, protecting ancient territories and power away from mankind’s greed.
Despite losing her left arm in a fateful fight, her faith and will remain as sharp as steel.
“I fight for my duty and for what i believe is right, even if I have to sacrifice the last of me” 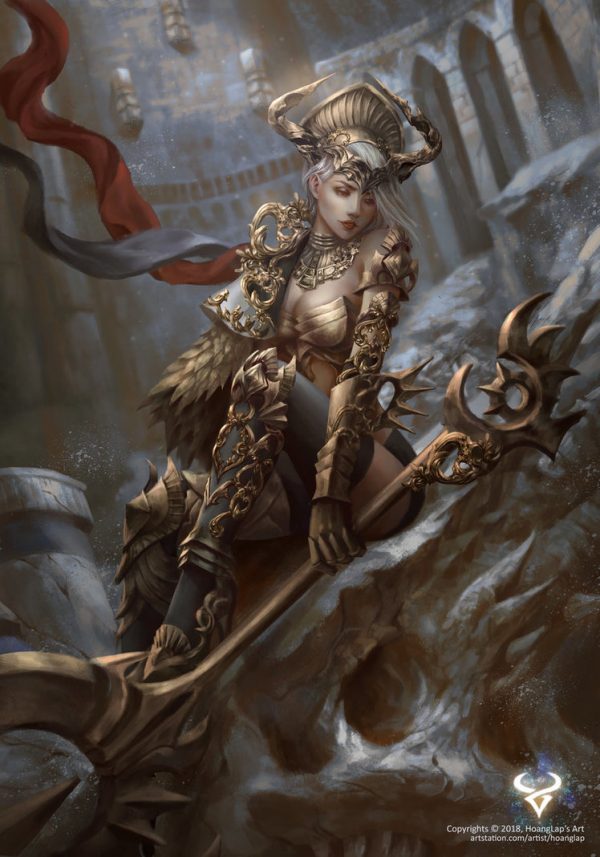 Living deep inside the Autumn Forest, the Twin Moths faeries play captivating melodies from human’s reminiscence, with their magical grand harp.
One can ease sadness, the other brings pains.
They are neither friends nor foe. They just come to play. If they fall for the melodies that are created from your memories, they might take it, and make it their own. 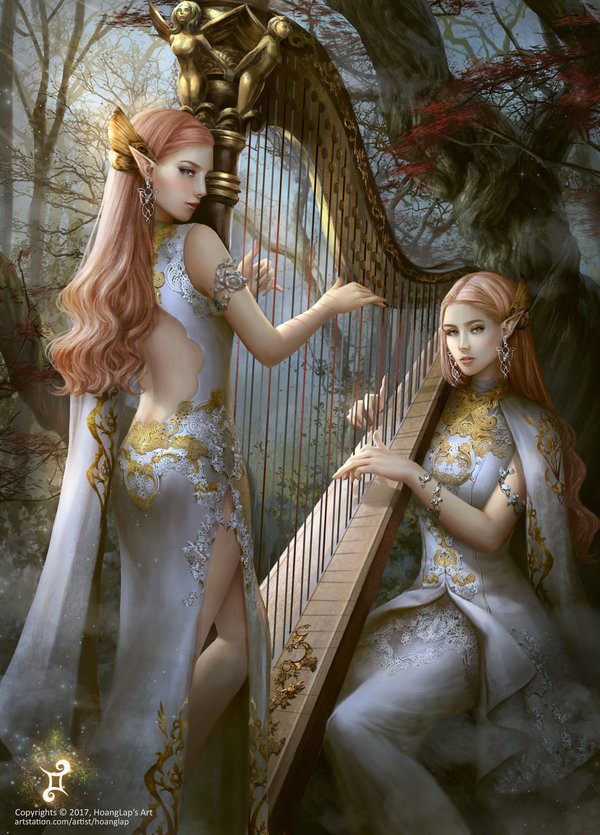 Cancer pours her heart out in every note as she plays the requiem for lost souls in the depth of sea – a requiem with the saddest melody, the coldest “rest”, and the softest yet painful decrescendo as it reaches its final measure.
“Wandering lost souls, do you feel my sorrow? My Deep Sea Sorrow. Follow my piece and I will guide you to eternity”. 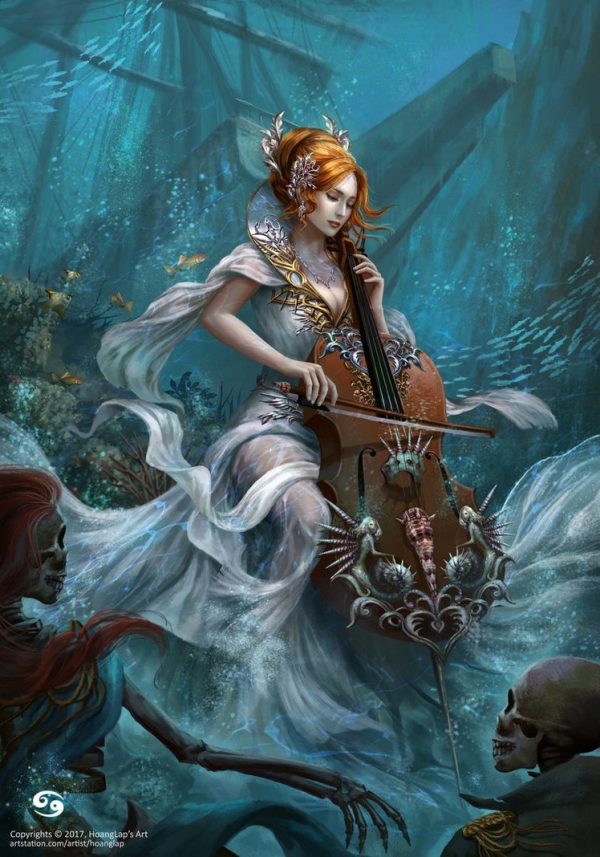 His father was known as the great knight riding a stout white lion. But unfortunately they was killed during the battle against Black dragon Sage.
So he’s training himself stronger, together with his guardian. He will revenge for his father, kill the Black dragon sage, and restore his family’s dignity. 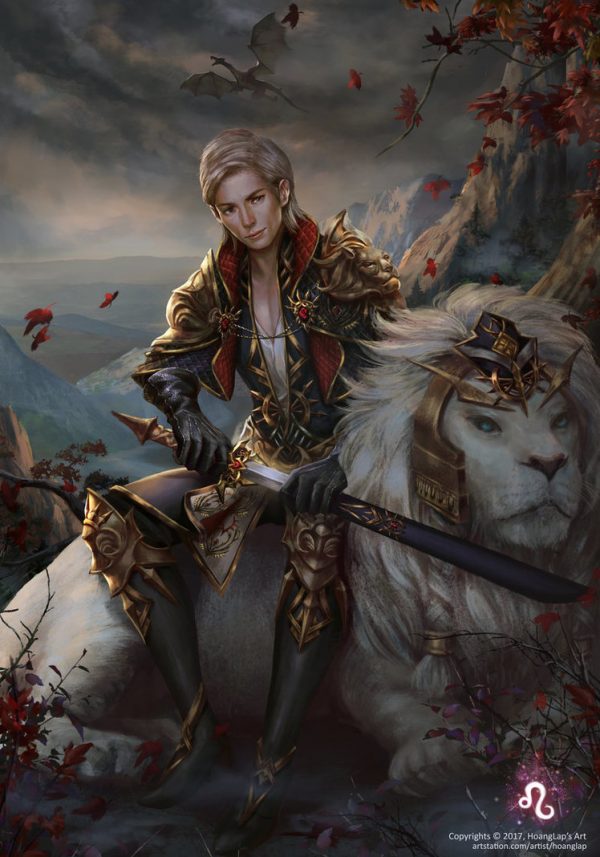 She’s the guardian of Memories Flowers Garden.
But somehow she’s trapped in her own memories – holding sadness, sorrow and regrets. Without noticing there are flowers not yet bloomed – which might bring happiness and delights. 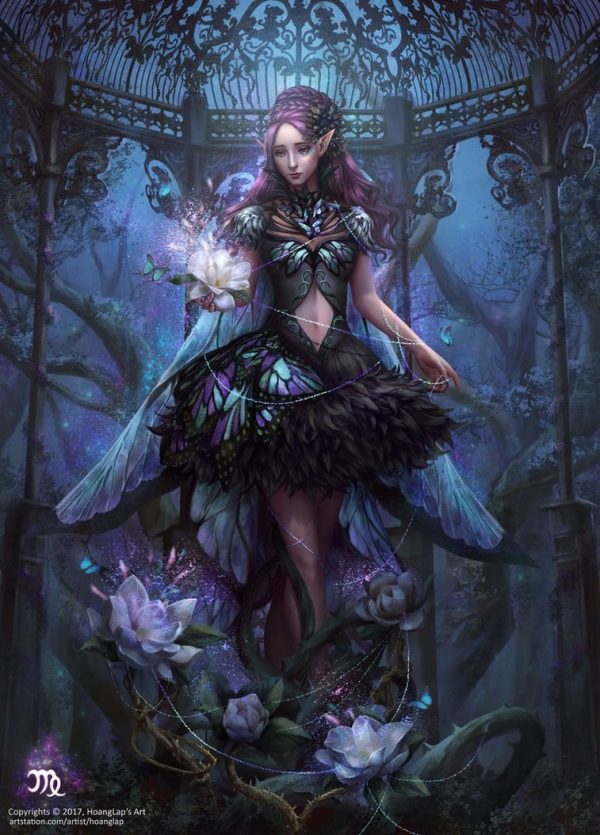 She only appears once in the Full Moon festival
Her mystical lanterns were told to had a magical power which protects children from bad dreams and evil spirits during the holidays. 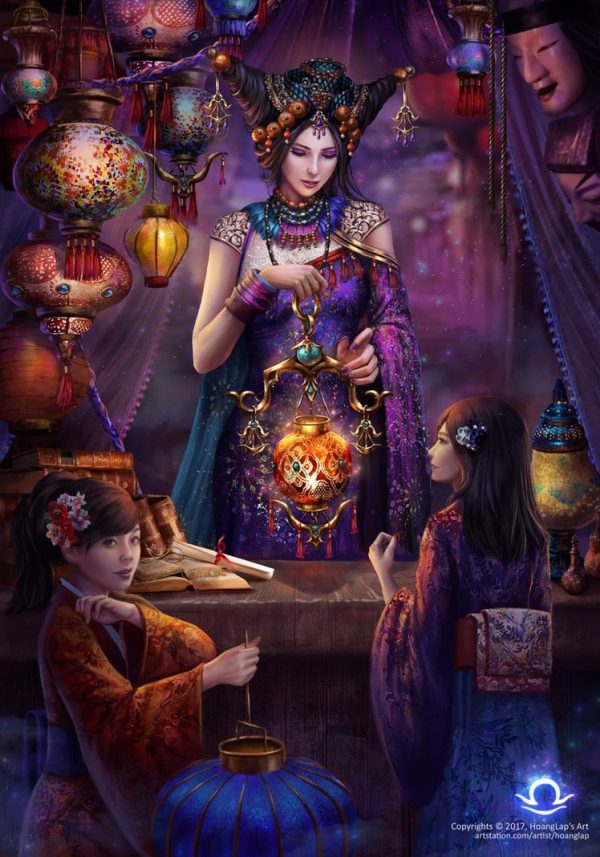 “Sweet, Charming and Dangerous
This dance would be the last thing you could remember” 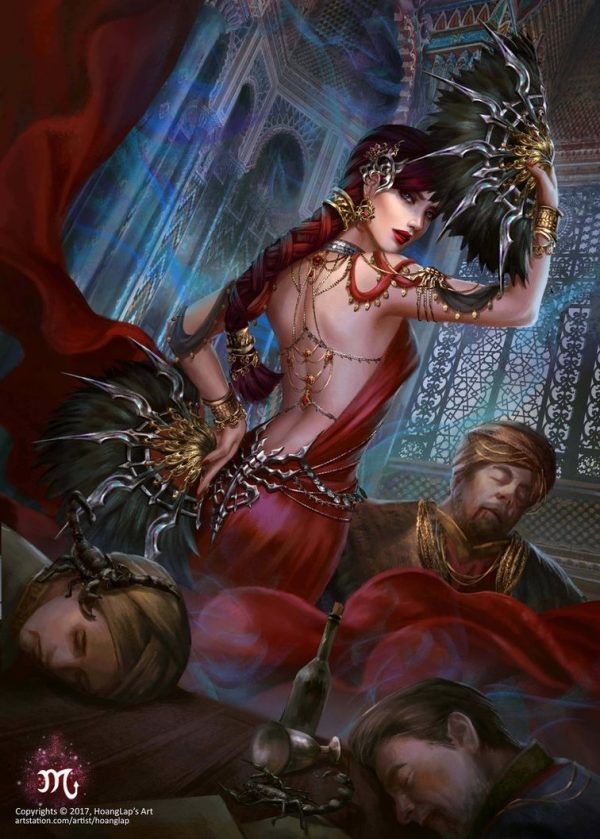 The white Centaur clan lives deep inside the winter forest, surrounded by mountains and cold breezes.
However, the girl was told stories about green hills, where the sun shines bright, and Spring brings colorful winds to animals and lives.
She dreams of leaving the place, being able to explore the outer world herself, seeing other colors than just white, and fall in love. But she was bound by her clan, and family.
The girl shoot an ice arrow to the sky, wishing she could be the same, flying high, free and fearless. 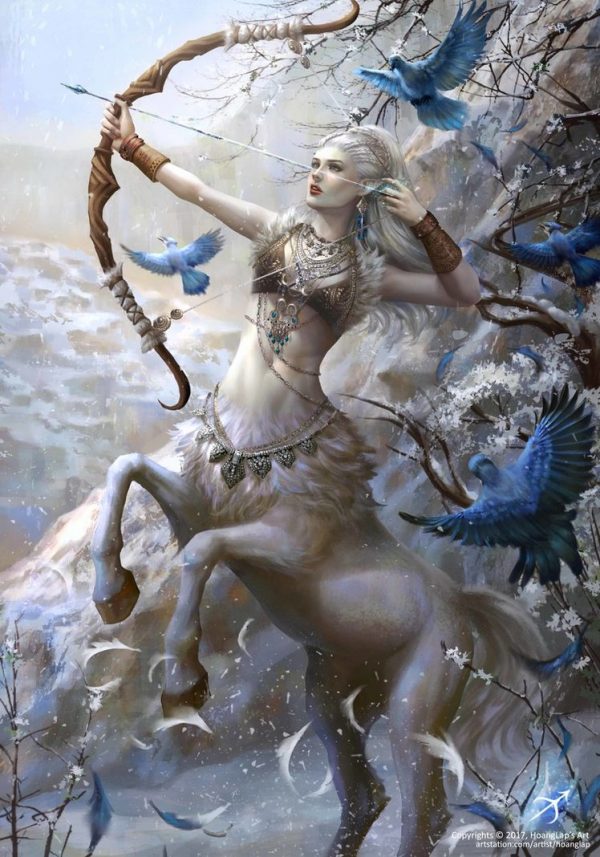 Legend said that back when the universe was in chaos. She was the one rearranged and gave births to planets, giving the first light and strong bonds between constellations.
Million years passed, and human has forgotten her. But at the end of their life, they will once again comeback to her – guardian of time and space portals, to choose which afterlife path they will go. 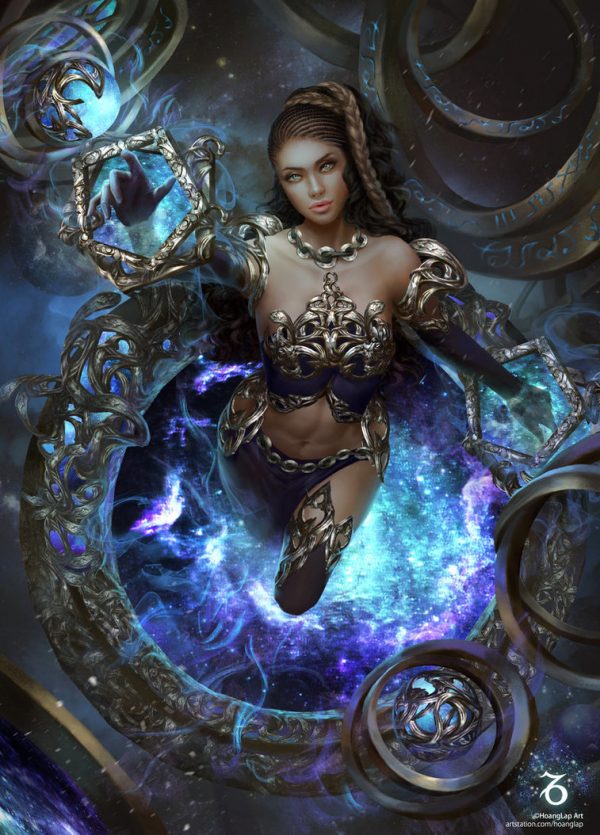 This marvelous nymph often come to play at the sacred water chamber.
One can control the flows of water is said to be able to control heart’s emotions as well.
“Wandering human, what are you searching for, the wishing spring water, or your truest desire? Calm your mind and you might feel water rhythm flows into you”. 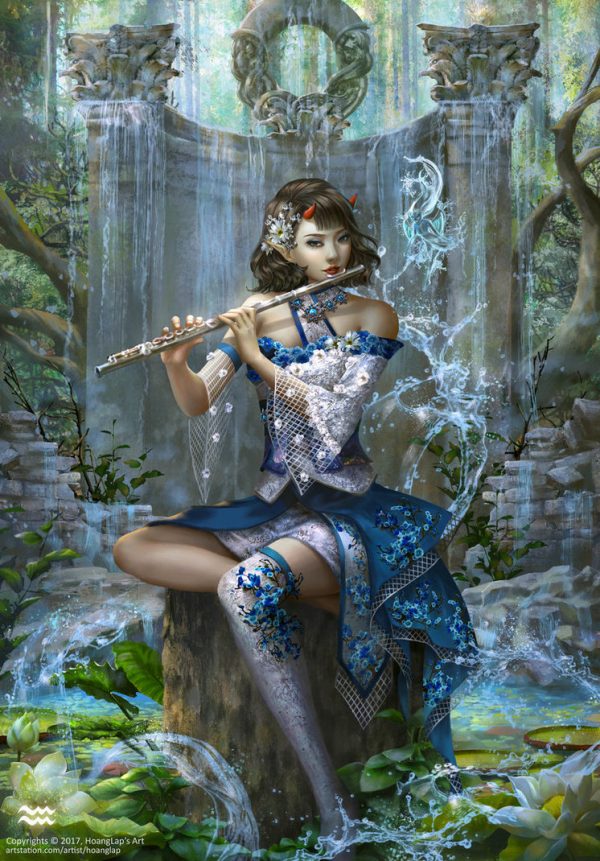 The two girls were born princesses of the ocean
But one seeks for eternal love, the other seeks for wealth and power on man land.
Neither good nor bad, they just follow their true desires, even if those are unrealistic and just fantasies. 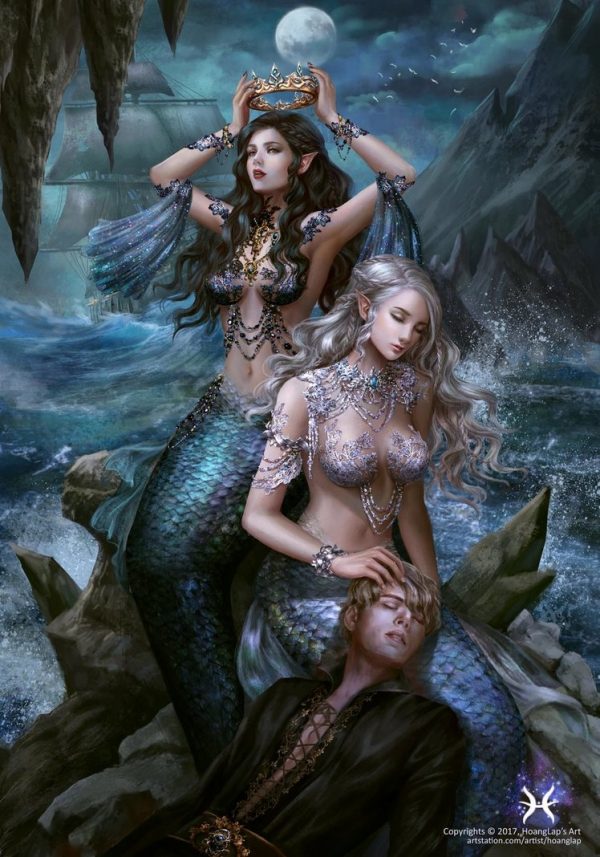 “Im a professional digital illustrator, working mainly on various fantasy illustrations in realistic, semi-realistic style. Have 2 years experiences on many card game projects (in both manga and realistic styles). My strong skill is character design. Also love to take part in concept design.”