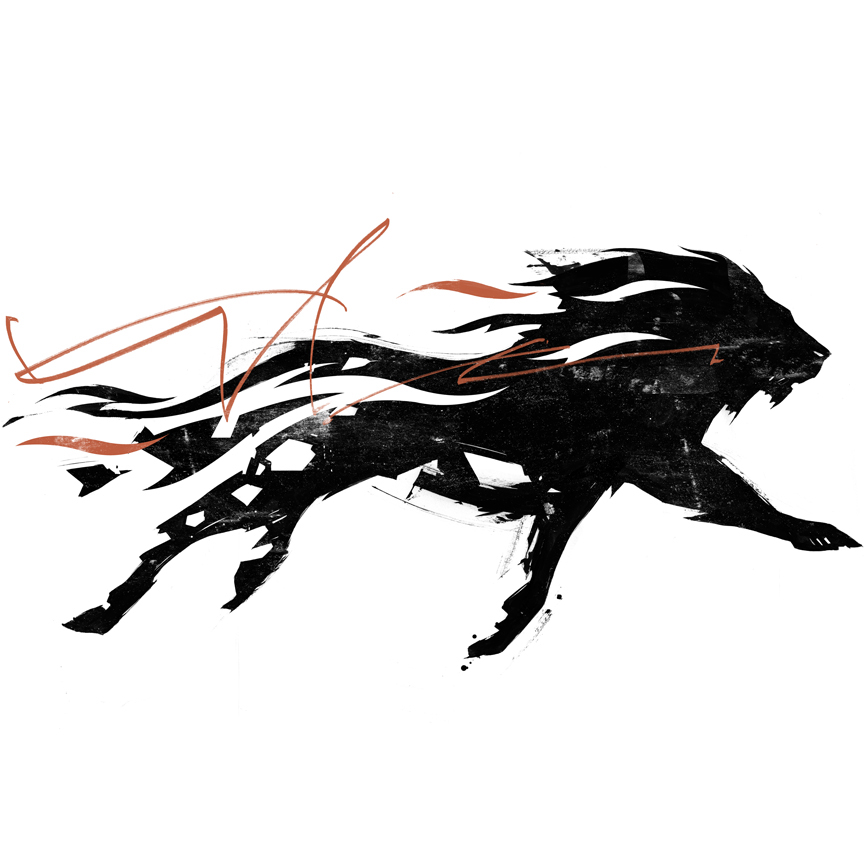 The Face of the Deep / The Spirit Who Creates
I find ravens endlessly fascinating. This served as the perfect lead image for these icons. We chose a raven for the symbol of creation in keeping with many creation and bringing-of-light tales of the indigenous Northwest tribes. There are also a few obscure ancient Christian references to the Spirit at creation as a dark bird (before light was made). 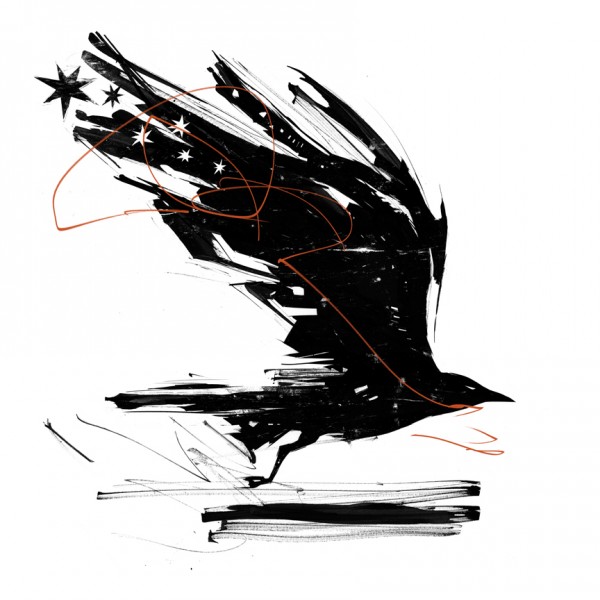 Tooling the Creators / The Spirit Who Inspires
The hand of the maker—a symbol loaded with possibilities. I left this image very simple, as a contrast to the rich spiritual ideas that swirl within it. 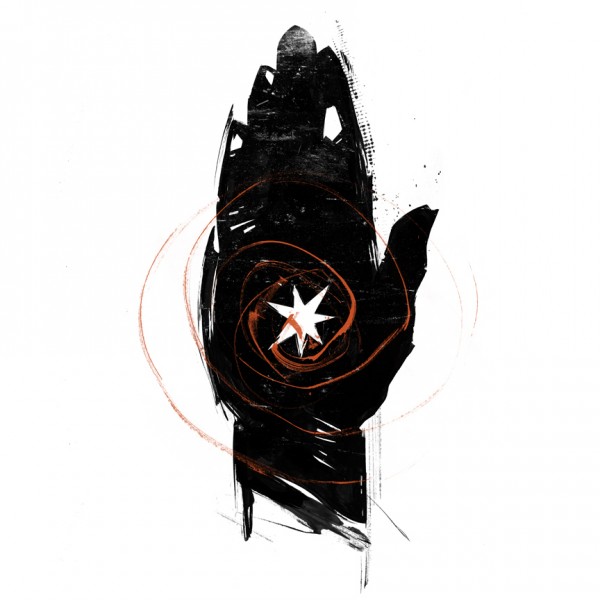 The Power of the Prophets / The Spirit Who Speaks the Truth
The star descends into the prophet’s mind, illuminating him and turning his head heavenward. Based on the content of this chapter, this was to be a “portrait” of King Saul and his decent into wickedness. I was sitting in church one Sunday morning drawing in my sketchbook and pondering this particular illustration (worshipful multi-tasking). I looked up at one point and scanned across the congregation and noticed a young man listening intently. His profile offered the perfect mix of intense power and sadness so I did a quick sketch that became the basis for this image. 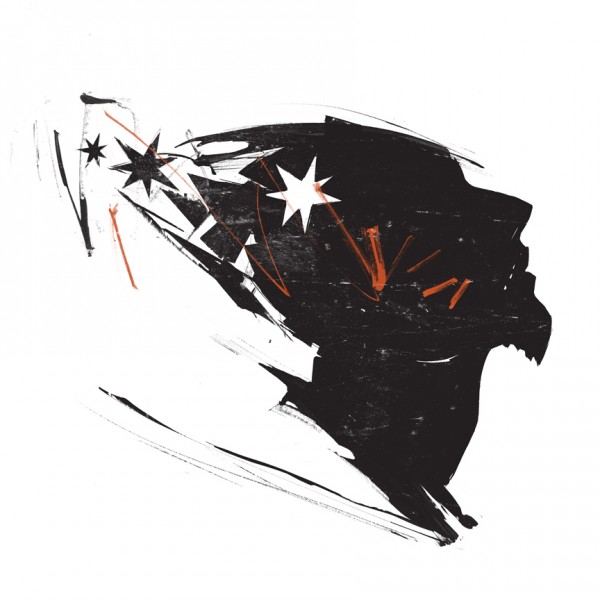 The Voice of the Mountain / The Spirit Who Meets Us
One of my favorites in the set. I wrestled with this one, trying to capture the mountain as a place of sacred encounter – showing the ascent and descent, the light and dark, the star like a sunrise. 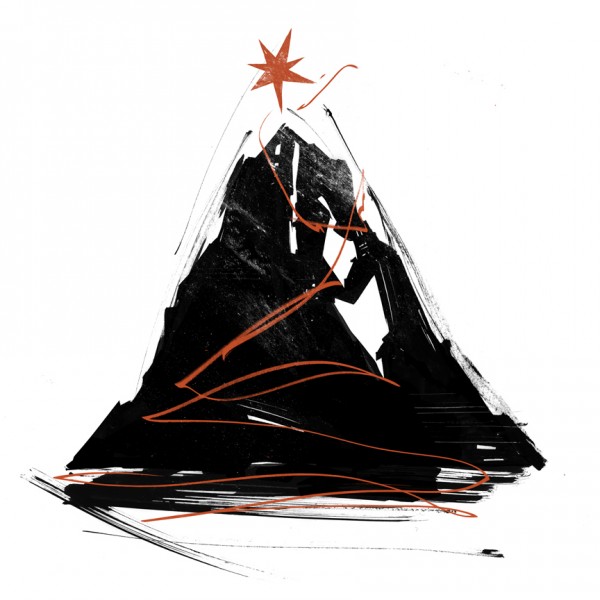 From the Stump of Jesse / The Spirit of the Messiah
The frailty of the sprout under the star speaks to the frailty of the Messiah in Isaiah’s metaphor. A challenging prompt to say the least. My inclination would have been to create a very different “portrait” of Messiah, but this understated graphic seems to speak to the surprise of his life and ministry. 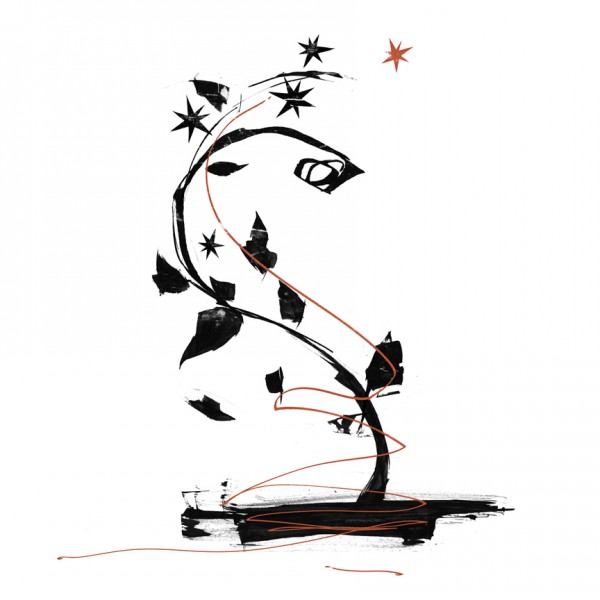 The Renewer of the Earth / The Spirit Who Sustains
I explored many different ideas for this one, searching for the right symbol. Once I got the running stag, it felt in rhythm with Paul’s content for this chapter. 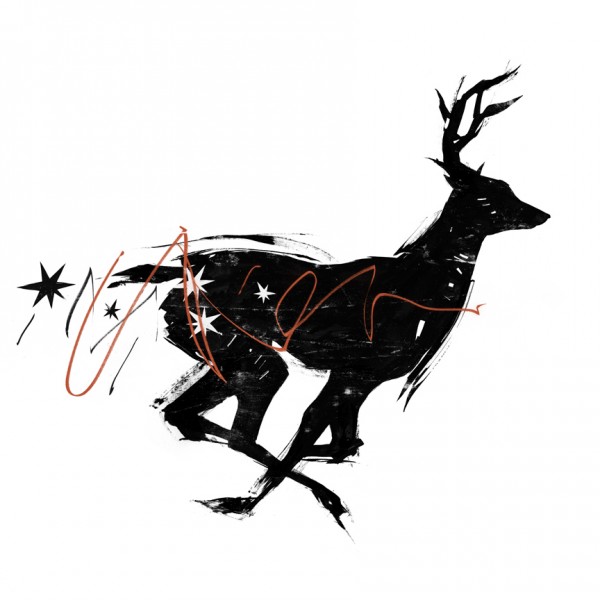 Poured on All Flesh / The Spirit Who Does New Things
The form of a butterfly is so nuanced, I was hesitant to present it in such a simplified image. And then the challenge of containing the whole cosmos, end and beginning, the “new thing”, in a single icon…crazy. Ultimately the symbol of metamorphosis was right for this content, and hopefully will direct the reader deeper into the ideas of this chapter. 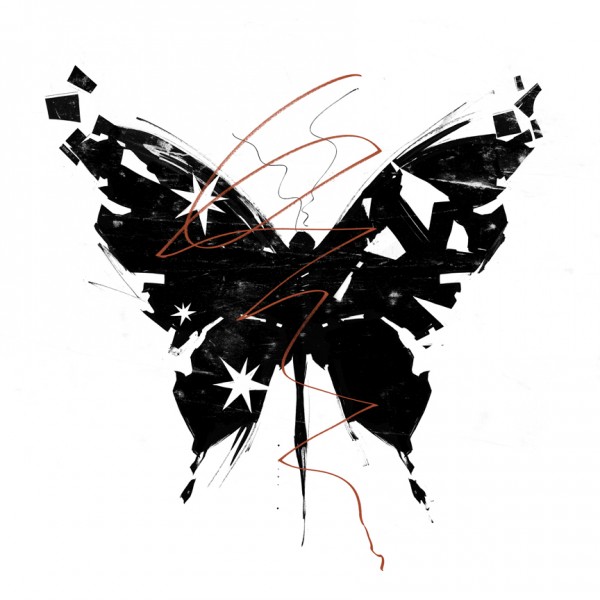 The Dove of the Beloved / The Sprit of Unconditional Love
Four symbols of the Spirit are at play here: dove, wind, fire, and light. The perfect set of raw materials for creating an icon. 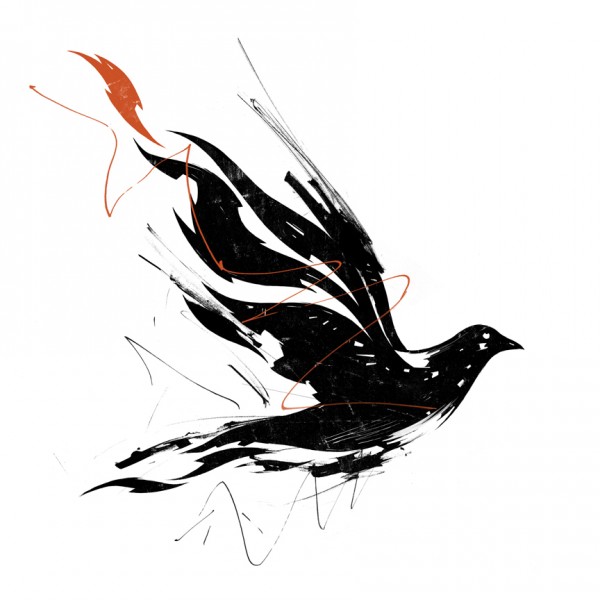 The Wind of the Wilderness / The Spirit of the Desert
The perfect visual prompt that became the most difficult image to “find” in the series. After many unsuccessful tries, a good friend reminded me of what I do best, and this is the result: The lion, coming together (or coming apart) made of wind and fire, chasing us Into the desert. I still want to illustrate this chapter with multiple images – 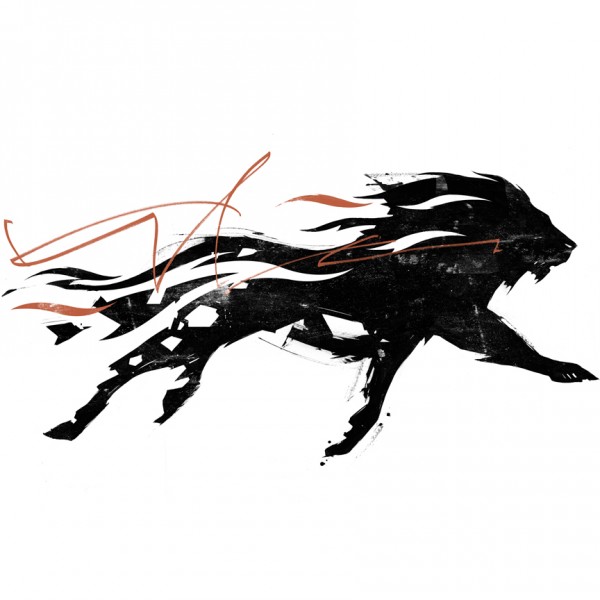 The Birth from Above / The Spirit of New Life
The man on fire preparing for birth. When Paul suggested this general visual idea, I saw it in my mind immediately. It was a month or more before I actually drew it, but it came together effortlessly, as if I’d drawn it a hundred times. A moment of perfect creative collaboration. 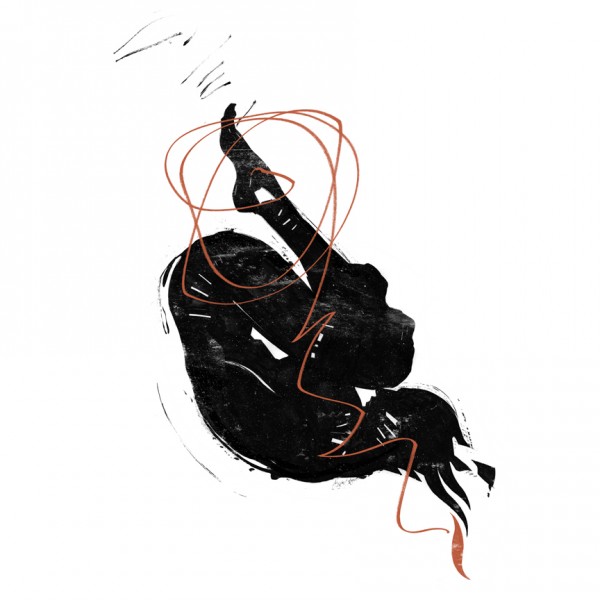 The Flame of Pure Speech / The Spirit Who Speaks through Us
The ziggurat, ancient Mesopotamian tower, is set on fire like a lamp. Babel turns into Pentecost. 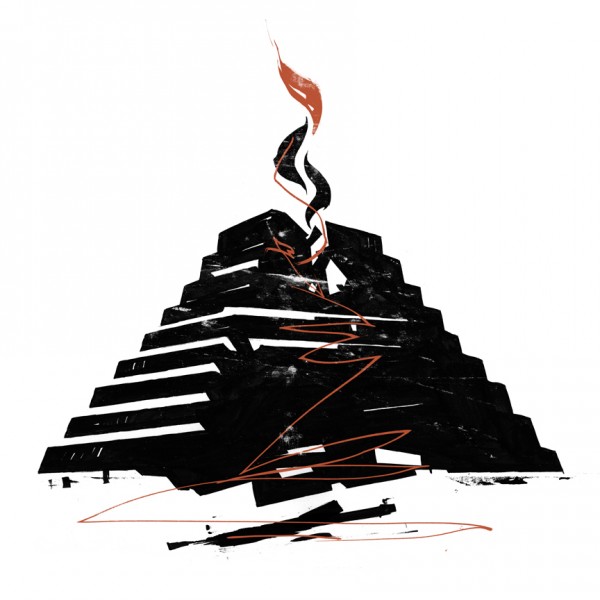 The Oil of Holiness / The Spirit Who Sanctifies
The oil on the forehead is the traditional mark of Christian anointing since the beginning. The person, saturated with holy oil, is aflame, becoming the Spirit’s lamp, shedding his light. The moody, intense portrait, in some ways very different than the other icons, creates a face-to-face encounter with the reader at an important point in the visual narrative. 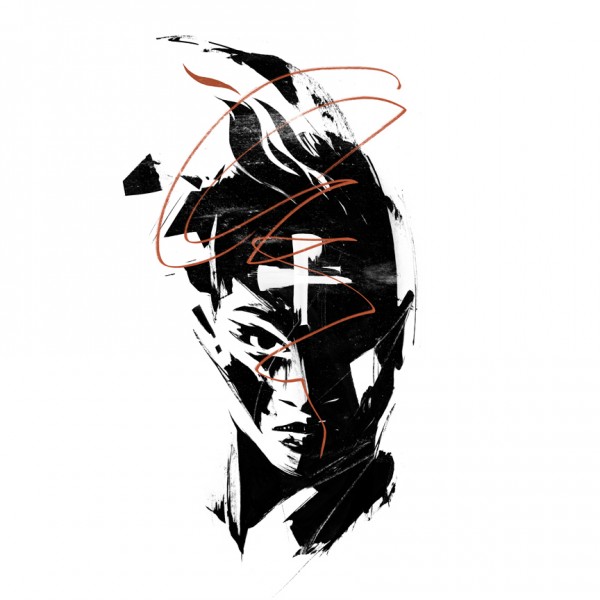 The Breath of One Body / The Spirit Who Unifies
Why a stunted tree for a chapter about breath? It’s the sprout, the body of Christ from chapter 5, all grown up. Grown up and sadly marred by disunity. The contours echo a system of veins, transits of oxygen. The sprout and tree icons echo one another, creating a more complete story when considered together. 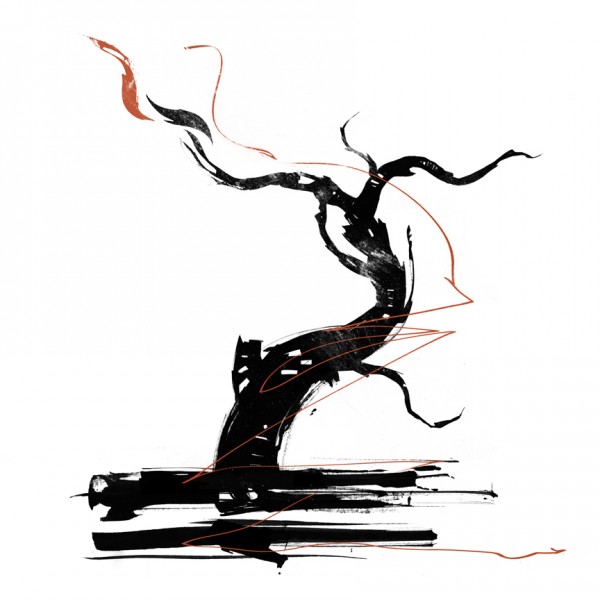 Come / The Spirit Who Invites
Pure invitation. Fire and stars, sperm and egg, the globe, a drop of water, the whirlpool of the face of the deep turning to recreation by the Spirit. And it’s an exclamation point to conclude the series. Bam! 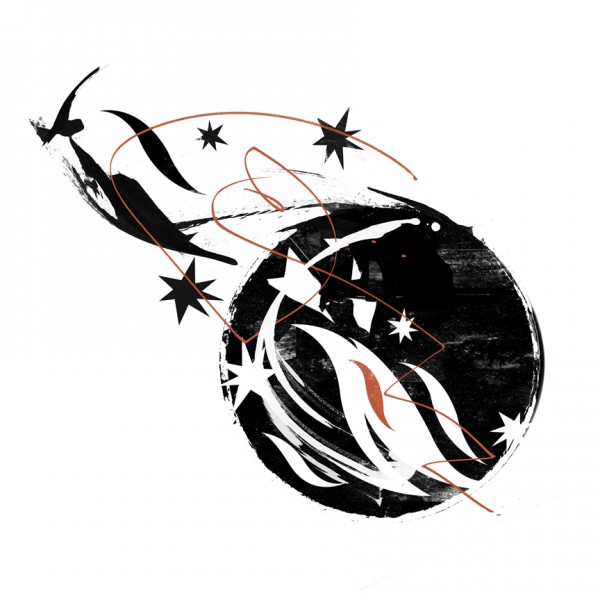 14 icons for the book The Face of the Deep: Exploring the mysterious life of the Holy Spirit, by Paul J. Pastor. Client: David C. Cook Publishers. The chapters in the book and their corresponding icons are in two sets of seven – Seven Stars and Seven Lampstands (represented by the flame motif). The two pairs of sevens serve to organize and visualize the movement of the Spirit throughout the Bible. The Star and Lampstand symbols are from the book of Revelation.