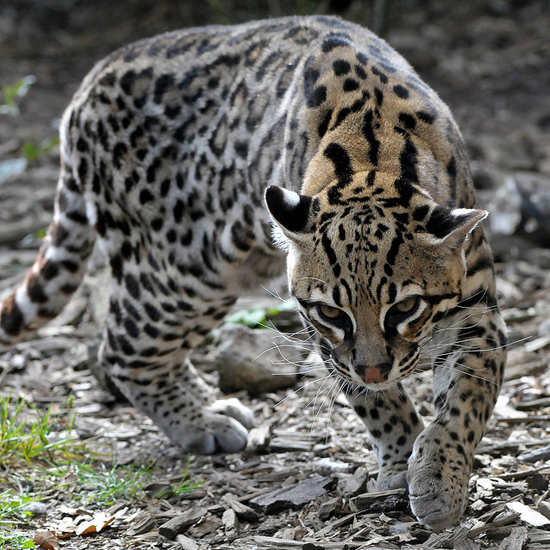 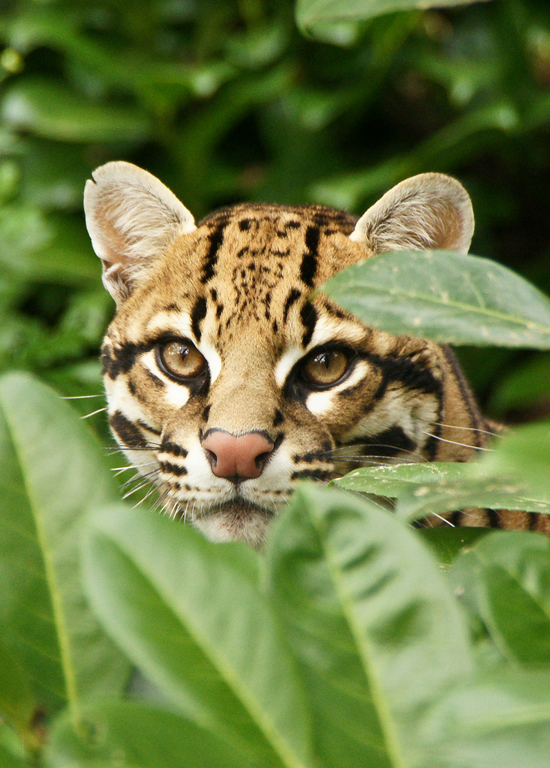 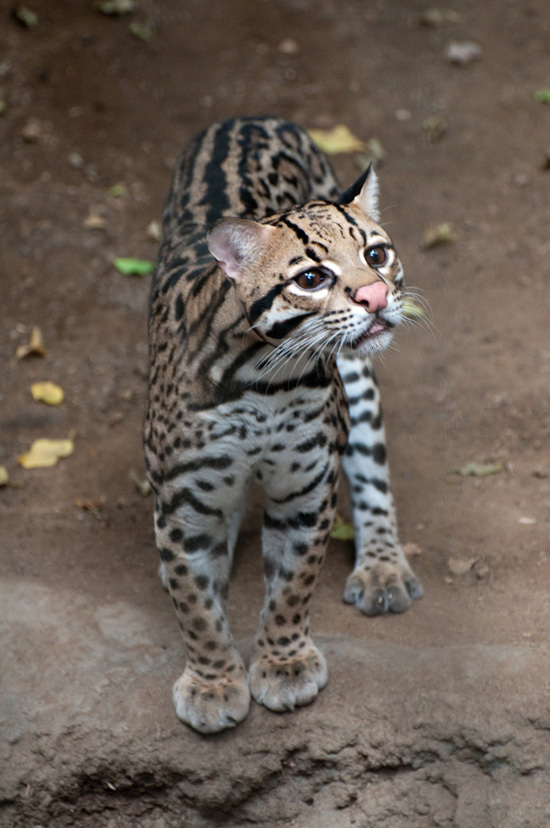 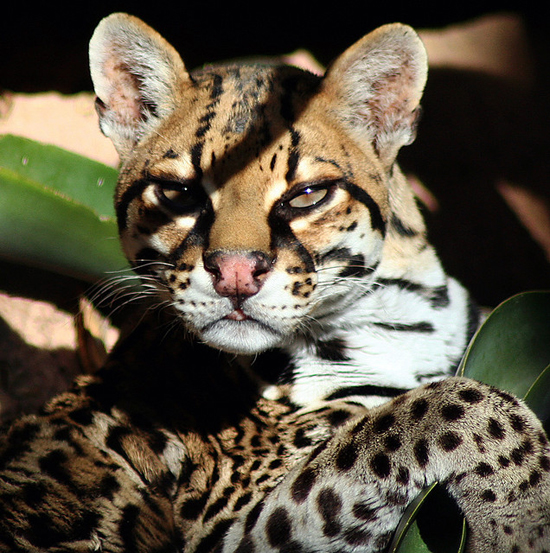 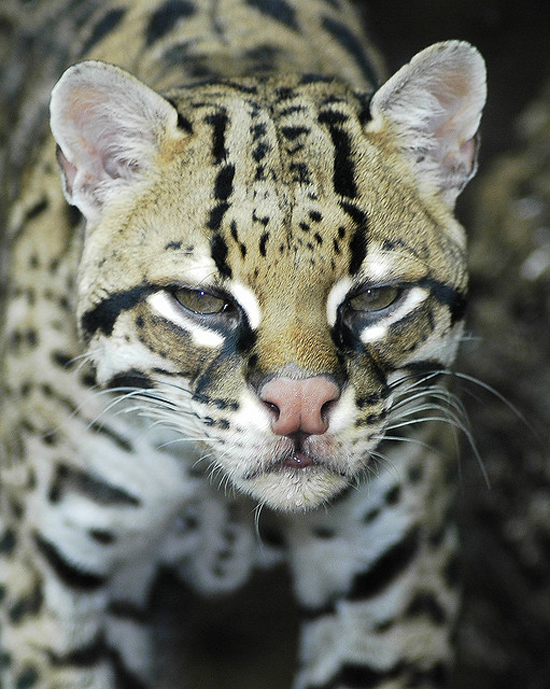 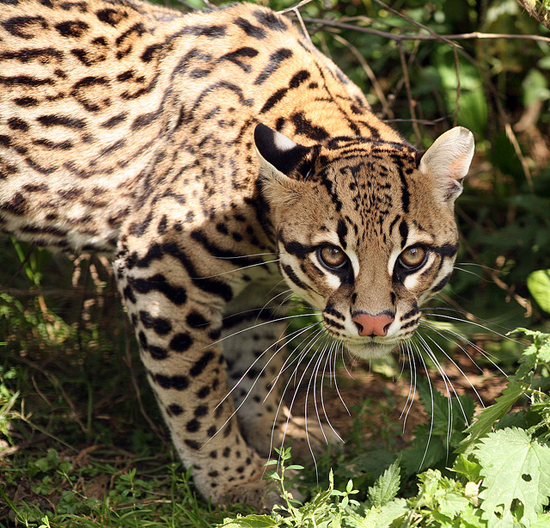 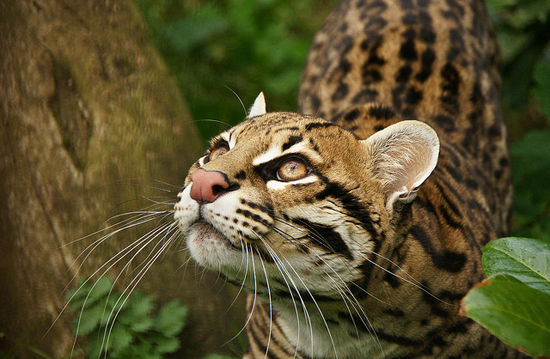 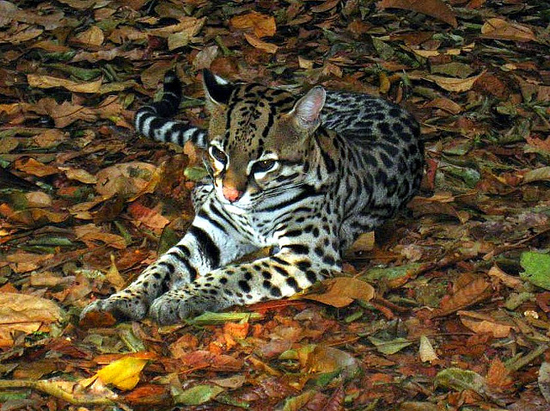 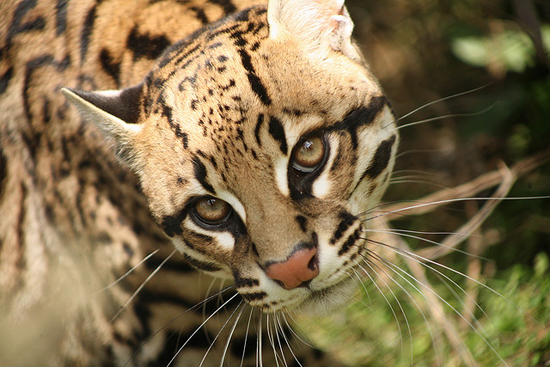 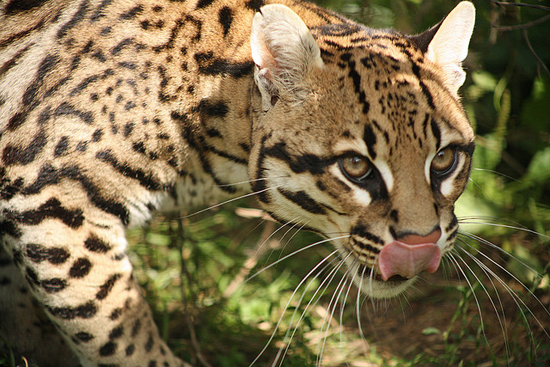 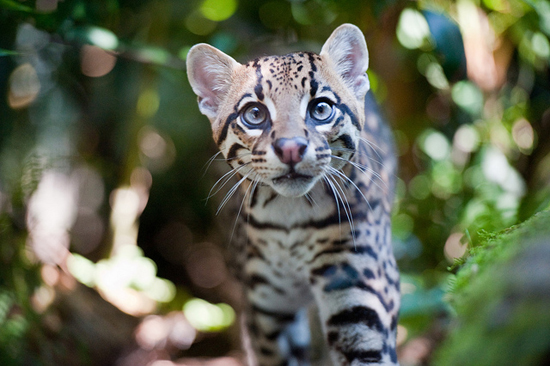 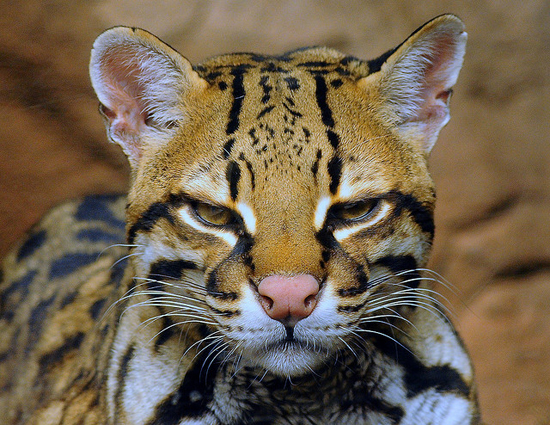 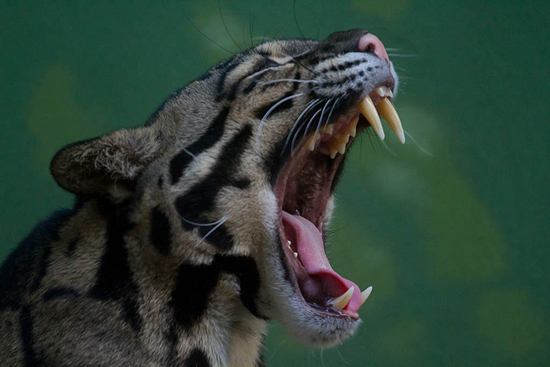 At one point it was thought that this magnificent animal would become extinct in the wild before the twenty first century. The International Union for the Conservation of Nature and Natural Resources (IUCN) placed it on its vulnerable list (known as VU) but since 1996 it has been considered no longer at risk in the wild Ranging from South and Central America up to Mexico – it has even been spotted in Texas. However, this being said, many are still extremely concerned for the future of this gorgeous animal in the wild.
Lithe and slender, the Ocelot can grow up a meter in length, with almost half of that again in tail length so it is larger than your average moggy. In fact, it is the largest wild cat in its genus – that of Leopardus. If you look carefully you will see that behind each ear an Ocelot always has a white spot – and there are two black lines, like war paint that extend down either side of its face. This is mostly how it is told apart from the similar looking Margay and Oncilla wild cats that inhabit the same areas.
Cute is not the word. There is hardly a person who, when encountering an Ocelot in a zoo can hold back an involuntary ‘aw’. However, don’t be fooled by the looks – this is a killer cat and its looks belie its true nature. Like in the song, it only comes out at night and to say that the Ocelot is nocturnal would be a slight understatement. It will fight tooth and nail for its territory – even to the death.
Although the Ocelot has and is kept as a pet it is not advisable, especially if you have children. They will want to pet this beautiful creature but if you have every seen a cranky domestic cat retaliate to a pulled tail; put a factor on that and then some. Just look at the teeth – and consider if you would like to have this particular cat around, despite its beauty.
As it is nocturnal, the Ocelot when seen in the wild is usually at rest and so this might give the casual onlooker an idea that this cat is a somewhat complacent animal. In the evenings it comes to life and stalks it prey with the same ferocity and tenacity as other felines. It is a solitary creature, too – it is unlikely you will ever see a group of adult Ocelots together.
However, it will suffer company occasionally – but only an Ocelot of the same gender. After mating the kittens are usually born about seventy to eighty days later and the litter normally numbers two or three. Taking photos of kitten Ocelots is incredibly difficult to do in the wild as the female is adept at hiding herself away in a safe place during that period.
The Ocelot is not a stupid hunter – it usually goes for prey smaller than itself: reptiles, lizards, frogs, crabs, birds and fish (they are good swimmers) are all on the menu though it will sometimes go for mammals such as small deer. It is thought but by no means established as fact that it finds its prey through its very sharp sense of smell and tracks them down via their odor trails.
Ocelots have been kept as pets but it is not altogether a good idea for this wild animal to be introduced in to a domestic environment. Possibly the most famous person to own an Ocelot as a pet was the artist Salvador Dali. As well as being at risk from hunters for its fur (yes, some people will still wear it) the illegal pet trade is also a factor in the decline of the numbers of the animal. Humans being perhaps the most selfish animal on the planet, little thought is given to taking an animal from its natural habitat and placing it in a cage for the rest of its life for the amusement of individuals with more money than compassion. Yet many zoos are contributing to the preservation and study of the ocelot, something that private individuals rarely can do.
Whether or not the IUCN agrees, most conservation societies list the Ocelot as highly endangered and vulnerable species. All signs indicate that it is in decline in all of its territories. Perhaps the IUCN should reconsider its classification: after all, it would look rather foolish if this graceful and gorgeous creature were to disappear in the wild under its nose. What a shame it would be if this beautiful cat was, in the future, only to be found behind wire.